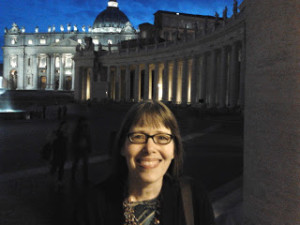 A former rock journalist who interviewed artists such as Brian Wilson and Harry Nilsson in New York, is touring Ireland promoting the virtues of chastity.

Dawn Eden, who has penned books such as The Thrill of the Chaste (Catholic Edition), spoke in Dublin last night and is to visit Belfast tonight (Tuesday) and Waterford on Wednesday.

She converted to Christianity in her 30s and jokes that she felt she had to be “joyfully chaste” because her conversion would not have been really worth it unless there was some joy along with it.

In her talks she speaks about her conversion and on the topics in her books including chastity.

She told RTE’s John Murray Show: “I became a Christian when I was 31, so for me trying to read those teen books (on chastity) was so depressing because they tell you, you lose your virginity and your life is over.”

“So I wanted to write this book ‘The Thrill of the Chaste’ to tell people that really we can be recreated in Christ. Sure it’s better not to sin because we hurt ourselves when we sin and it is painful to us, but if we have sinned God can take this broken vessel and put it together in a way that is even better, and so the cracks and the wounds add to the beauty.”

She said that her talks and books are for single and married people. 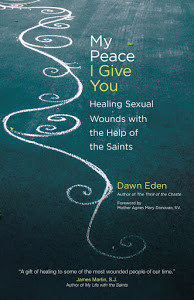 She explained that the Catholic Church teaches that all the baptised are called to chastity. So for married people chastity includes the marital act, but also includes fidelity and not objectifying oneself or one’s partner.

The subtitle of The Thrill of the Chaste is Finding Fulfilment While Keeping Your Clothes On. Her other book is titled My Peace I Give You: Healing Sexual Wounds with the Help of the Saints.

The latter book touches a very serious subject and she explained that she suffered abuse when she was five years old.

In all her talks she emphasises the need for people who have been abused to get every spiritual and psychological help that they need.

She said that as a catholic she found healing through the lives of the saints who had suffered abuse.

For example Laura Vicuña, Thomas Aquinas and Bernard of Clairvaux are among saints who suffered sexual abuse or sexual inappropriateness, as well as saints such as Ignatius of Loyola who suffered other forms of mistreatment and abandonment.

She was born into a Jewish family in New York City but became an agnostic in her teens. During her twenties, in the 1990s, she worked as a rock journalist in New York City, and later in editorial positions for the New York Post and the Daily News. 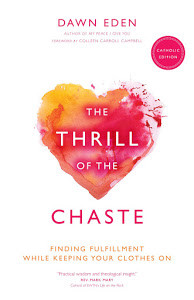 At the age of 31, she converted to Christianity and ultimately entered the Catholic Church.

Her books have been featured in the New York Times and on numerous EWTN programmes, and they have been translated into multiple languages, including Spanish.

She also featured on the CatholicIreland.net video section speaking about the saints. https://www.catholicireland.net/my-peace-i-give-you/

She has studied sacred theology at the Dominican House of Studies and is currently pursuing a doctorate at the University of St Mary of the Lake.

Dawn Eden has spoken about chastity, spiritual healing, and conversion to thousands of people throughout North America and beyond.

The final dates on her European tour including the UK and Ireland are:
June 9: ‘The Thrill of the Chaste: Loving Fully with Body and Soul’ at Malone House, Barnette Demesne, Belfast, 7pm.

June 10: ‘Is Sex Love? Why Chastity Is Key’ at Café Theology in the Tapestry Room of the Granville Hotel, Waterford, 7:30pm.