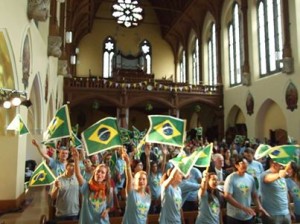 The Archdiocese of Dublin is planning a follow up event in September to last week’s hugely successful World Youth Day in Brazil and the simultaneous ‘Rio in Dublin’ gathering.

It follows widespread praise from the 170 Irish pilgrims who attended WYD2013 in Rio de Janeiro and also from the young people who attended the archdiocese’s home-grown ‘Rio in Dublin’ event at the weekend.

As many as 300 young people stayed up most of Saturday night for a prayer vigil in the Church of St Mary of the Angels in Dublin where they were united via an internet link with the young people at Rio de Janeiro’s Copacabana beach.

According to those who took part in the gathering in Dublin over Saturday and Sunday, they were able to absorb something of Rio’s atmosphere as three million young people prayed with the Pope on the beach.

In both locations, the tiredness brought on by a mostly sleepless night was swept away by the sheer joy of the occasion.

“World Youth Days do plant seeds for young people. Parishes have asked me what this is all about – it is helping to nourish young people’s faith and you don’t know when in the future that is going to come to fruition,” Veronica Jackson of the Office of Evangelisation in Dublin said.

She helped co-ordinate ‘Rio in Dublin’ and has attended many international WYD events in the past.

The Dublin gathering comprised a full programme of liturgical and pastoral events of the same kind as were being undertaken at the WYD in Rio, including catechesis, music, Stations of the Cross, the prayer vigil and the Eucharist.

The Brazilian community in Ireland added their own flavour through music and dance while a justice programme, organised by Magis Ireland, facilitated voluntary work by 45 young people with the homeless and at a refugee centre in Dublin.

Recounting their experiences to other young people, one Magis volunteer said, “You see homeless people on the street but once you have experienced their story it makes it more real.”

For two teenage girls from the parish of Sruleen in Clondalkin this was their first WYD experience.

They participated in the Magis programme and described it as “amazing” and “such a great experience” which gave “much food for thought.”

“Everything from catechesis to testimonies to adoration to Taize prayer (and everything inbetween) was beautiful and really created a brilliant spirit. We met some lovely people and are hoping to bring what we experienced back to our parish,” one of them commented afterwards.

Accommodation for the young people was provided by Bro Kevin Crowley and his team at the Capuchin homeless centre.

The Dublin event started at 6pm on Saturday evening with a lively musical welcome from the Brazilians and Portuguese who are part of the local parish. Crosscare provided light refreshments throughout the night and kept everyone going.

Catechesis was provided by Fr Kevin Doran and Colette Furlong and focused on discipleship and the Camino de Campostella where Fr Kevin had recently been on pilgrimage.

“They linked it to baptism and how we are called to be disciples and how we can’t be a Christian on our own,” said Veronica Jackson.

The vigil involved an hour of Taize style prayer and the Brazilian community also led for an hour.

At 4.30am the young people went out to the quays in Dublin to pray at dawn. After some ‘chill out’ time and breakfast they continued with the Sunday programme.

“It was a good event, a good time out and people had a positive experience,” said Veronica Jackson.

‘Rio in Dublin’ was a collaboration between the Office of Evangelisation and groups such as Magis, Young Christian Workers, Elation Ministries, Dublin Gospel Choir, Teen SpiriT, the Capuchin community and many more. Volunteers from the Eucharistic Congress also helped out. 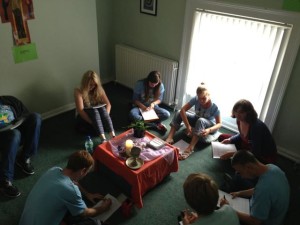