Richest 1% has more than all the rest – Oxfam 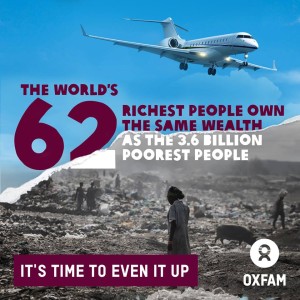 Sixty-two individuals own the same share of the world’s riches as all the rest of the poorest half of the world, according to an Oxfam report published ahead of the Davos meeting.

“It is simply unacceptable that the poorest half of the world population owns no more than a small group of the global super-rich – so few, you could fit them all on a single coach,” said Mark Goldring, Oxfam GB Chief Executive.

The report titled ‘An Economy for the 1%’ shows that wealth of the poorest half of the world’s population, 3.6 billion people, has fallen by a trillion dollars since 2010.

This 41 percent drop came as global population was increasing by around 400 million people during that period. The wealth of the richest 62 has increased by more than half a trillion dollars to $1.76 trillion.

“Rather than an economy that works for the prosperity of all, we have instead created a global economy for the 1%. Ordinary working families are up against odds that are impossible to beat. The big winners are those at the top and our economic system is heavily skewed in their favour,” wrote Jim Clarken, Oxfam Ireland, in his blog.

Oxfam has called for urgent action to tackle the inequality and urged world leaders to: crack down on tax dodging; increase investment in public services; and take action to boost the income of the lowest paid.

In particular it highlighted tax havens, where rich people’s use of offshore centres denies governments valuable resources needed to tackle poverty and inequality.

“This potential tax revenue is needed to pay for vital services like schools and hospitals; the services which play a vital role in tackling inequality and escaping poverty. It means governments keep putting their hands in the pockets of ordinary taxpayers to pay for the shortfall – many of whom can least afford it,” stated Jim Clarken.

“With 2016 being an election year throughout Ireland, north and south, Oxfam is calling on election candidates to prioritise inequality and inviting voters to join its campaign calling on politicians to tackle tax dodging, roll out universal access to healthcare and end the gender pay gap in their respective new programmes for government,” he concluded.

Globally, it is estimated that super-rich individuals have a total of $7.6 trillion in offshore accounts.

If tax were paid on the income that this wealth generates, an extra $190billion would be available to governments every year.

This is not confined to the so called ‘first world’ countries, almost a third of all African wealth is estimated to be held offshore. This amounts to around $14billion in lost tax revenues every year.

Oxfam said that such money could pay for healthcare for mothers and children which could: save 4 million children’s lives a year; and employ enough teachers to get every African child into school.

Allowing governments to collect the taxes they are owed from companies and rich individuals will be vital if world leaders are to meet their new goal, set last September, to eliminate extreme poverty by 2030, Oxfam cautioned.

While the number of people living in extreme poverty halved between 1990 and 2010, the average annual income of the poorest 10 per cent has risen by less than $3-a-year in the past quarter of a century.

That comes to an increase in individuals’ daily income of less than a single cent a year.