Richard III is finally laid to rest in Leicester

Richard III has reached his final resting place – Leicester Cathedral – following the discovery of his remains by archaeologists in 2012.

Having reigned from 1483 to 1485, the King died in battle and his crown was taken by the Tudors.

Archaeologists made the discovery of his body under a council car park among foundations of Greyfriars church not too far from his place of re-interment this week.

On Sunday (22 March) a service of Compline at Leicester Cathedral marked the reception of the remains of King Richard III.

In his homily, Cardinal Vincent Nichols, Archbishop of Westminster stated that Richard III’s life was caught up in the “deadly struggle” between dynastic families and he knew little peace.

In his day the battlefield, ruthless determination, strong alliances and the use of force “at times with astonishing brutality,” was the norm.

The King died in battle and his body was treated disrespectfully before a hasty burial.

“Again and again, the lessons of history are clear: force of arms alone never brings lasting peace; political ambition, if it is not to become toxic, must always be tutored by a determination to serve, especially those most in need; reconciliation is best inspired by the light of the promise of a God-given peace which is our common and enduring destiny,” said the Cardinal.

He prayed that the dignity and beauty of Compline might bring to all the desire to “serve rather than be served, to heal rather than to gloat in victories great or small, to honour and respect the other rather than seek advantage. In these ways, may our kingdom reflect the eternal Kingdom of God, to which we commend the soul of this King even as, at last, we permit his remains to rest in peace.”

Cardinal Nichols said that Richard III’s intentions have always been hard to fathom but in his two short years as king, he reshaped vital aspects of the legal system, developing the presumption of innocence, the concept of blind justice and the practice of granting bail rather than being held in jail.

He also established the Court of Requests to give wider access to justice and insisted on the translation into English of all written laws and statutes so that they were readily accessible to all.

The ‘King of England and France and Lord of Ireland’, as he called himself, was a man of prayer and he prayed for protection before battles. After fighting, he provided for the celebration of Mass and for prayers for all who died. He fully expected similar devotions and prayers to accompany his own death.

The Cardinal said that God has a different timescale, so prayers nowadays for the King are the no less valid than those of the people who prayed for him at the time of his death in 1485.

In a mediaeval parish church, Cardinal Nichols celebrated Mass for the repose of his soul in Holy Cross Church, the current Catholic parish church and Dominican priory in Leicester city centre.

In his homily on Monday (23 March) Cardinal Nichols said, “During this week, Mass is being offered in many Catholic Churches for the repose of the soul of King Richard III. Rightly so. That is exactly what he would have wished, having himself set up at least one chantry chapel for Masses to be celebrated for the dead of both sides of the Battle of Towton in 1461.”

“This was a most violent conflict, marking the defeat of Henry IV, a single day on which between 10-20,000 Lancastrians were killed and a stark demonstration of the tragedy of civil war. Prayers were indeed needed.”

The King was buried hastily in Greyfriars church in Leicester in August 1485.

His remains, which were discovered three years ago, were taken back to Bosworth Field where he fought his last battle, and then to Leicester Cathedral where they lie in repose until a re-interment service on Thursday.

“Richard was not a man of peace. The times in which he lived and the role into which he was born did not permit that. But now we pray for his eternal peace,” said the Cardinal. 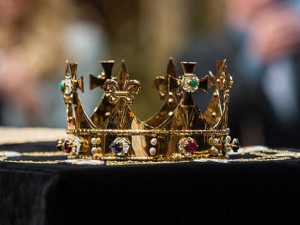 Bishops and priests from across England & Wales concelebrated with him, and the Mass was attended by several hundred people.

Known as the ‘Westminster vestment’, it was probably made in the third quarter of the fifteenth century, and today forms part of the heritage collection of Ushaw College, a former Catholic seminary for the training of priests near Durham.

Richard III lived and died a Catholic, and the Catholic Diocese of Nottingham and the Anglican Diocese of Leicester have worked together very closely in preparing liturgies marking his re-interment.

The Anglican Bishop of Leicester, Rt Rev Tim Stevens, and the Dean of Leicester, Very Rev David Montieth, were present at the Mass, along with clergy and representatives of various Christian traditions.