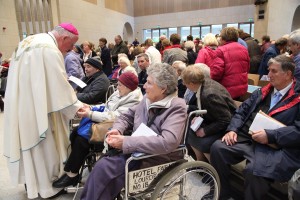 Bishop John McAreavey of Dromore blessing at the blessing of the sick on the first day of the National Eucharistic Congress in Knock. Pic John Mc Elroy.

The Primate of All Ireland, Archbishop Eamon Martin, has appealed to the Irish faithful to become “revolutionaries of tenderness!”

In his homily in Knock on the first day of the National Eucharistic Congress, the Archbishop of Armagh referred to Pope Francis’ last paragraph in his encyclical Evangelii Gaudium, in which the Pontiff said that love and tenderness can be ‘revolutionary’ in today’s world.

The leader of the Irish Church also referred to the Pope’s visit to Cuba earlier in the week in which he called for a ‘revolution of tenderness in the world’.

Addressing the Irish faithful gathered in Our Lady’s Basilica, Dr Martin underlined that the Pope does not see tenderness as a virtue for the weak but instead as a demonstration of strength which invites us to get out and encounter others, sharing their joys, hopes and frustrations.

“This revolution of tenderness calls us to be compassionate with the suffering, to visit the sick and prisoners, to comfort those who mourn and to be members of a Church which serves, builds bridges, breaks down walls and sows seeds of reconciliation,” he said.

Citing the working document (Instrumentum Laboris) for the Synod in Rome in October on marriage and the family he said it contains a beautiful paragraph about tenderness (70). 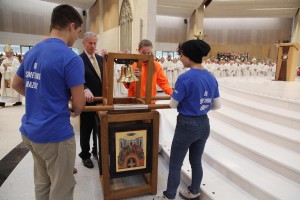 “Tenderness means to give joyfully and, in turn, to stir in another person the joy of feeling loved. Tenderness is expressed in a particular way in looking at another’s limitations in a loving way, especially when they clearly stand out… Tenderness in family relationships is the virtue which helps people overcome the everyday conflicts within a person and in relations with others.”

The Archbishop admitted it must be difficult nowadays to sustain the virtue of tenderness in family life.

“A culture of machismo, superficial ideas of love, unreal and illusory notions of romance – all of these can undermine tenderness in relationships today. But where it is allowed to grow and shine forth it can transform family life because it brings to family life an aspect of the identity of God,” he said.

He added that to be gentle it is necessary to be strong and courageous “for it calls us to tenderness and compassion in the face of others’ weaknesses and limitations. Gentleness speaks and lives the truth but never in a rough, hurtful or vindictive way”.

Acknowledging that he has not had the joy of being a father, he said he often wondered what it must be like for a parent to hold their little boy or girl in their arms for the first time.

“Surely the memory of that moment makes a connection deep within a mother and father which nourishes and shapes the relationship they have with their child for the rest of their lives.”

Recalling that Pope St John Paul II once said that one of the definitive icons of God’s love is the image of the Father running out to embrace the Prodigal Son, because that embrace sums up all the best characteristics of fatherhood and motherhood, he said it was also a picture of the revolutionary tenderness of God, whose loving kindness and mercy knows no bounds.

The Primate highlighted that many people nowadays experience the world as a heartless and unfeeling place, judging them, condemning them even. “ Sadly,” he acknowledged, “there are people who feel the Church is like this”. 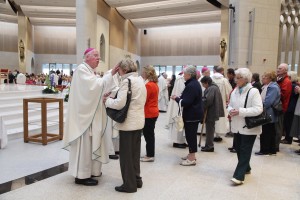 Ahead of next month’s Synod in Rome, Archbishop Martin said he had heard from many people, some suggesting the Church must be more merciful and prepared to develop some of its teachings on marriage and the family, taking account of the complicated and pastorally challenging situations that are so common nowadays.

Others, he said, had told me that the best way for the Church to be loving and merciful today is for it not to flinch or compromise with the relativistic culture of today. Instead, they say, the Church ought to hold on to, and proclaim, the truth of its message about marriage and family as a beacon to lead people out of the messiness of their lives towards conversion and true eternal happiness.

“Perhaps the tender loving kindness of the heart of God, which we glimpse in the intimacy of husband wife and child, can provide a lens through which to consider this dilemma, always being prepared to love, to forgive, to accompany and invite, while never condoning what is wrong, nor forsaking the truth,” Archbishop Martin concluded.