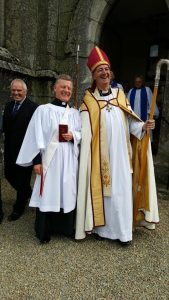 A former politician, Green Party leader, and government minister has become a deacon of the Church of Ireland.

While Trevor Sargent has no plans to return to politics, he takes his eco credentials into the ministry and is working with Rev Andrew Orr who is involved in Eco Congregations Ireland, which is part of an interdenominational body of Christians.

Trevor Sargent said that people bring their own talents into ministry, and his knowledge and interest in the environment lends itself to the fifth mark of mission in the Anglican Communion, which is to strive to safeguard the integrity of creation and sustain and renew the life of the earth.

He stated that he is focusing on that in particular in his studies and explained: “It is part of my Master’s dissertation.”

He has been studying theology in Trinity College Dublin and plans to complete his MA in Divinity next year. He was ordained a deacon on Saturday 26 August and plans to be ordained a full minister.

Trevor Sargent, who started out as a teacher, was leader of the Green Party between 2001 and 2007 and was a minister of state in the coalition government with Fianna Fáil from 2007 to 2010. He has always been involved in his church and set up a breakfast prayer group in Leinster House during his time as a TD.

“Whether it be in teaching or politics, through good and bad times, to know that one is not alone, in a Christian sense, and that one is able to rely on a power greater than oneself is a great comfort,” he told Sean O’Rourke on RTÉ Radio 1. 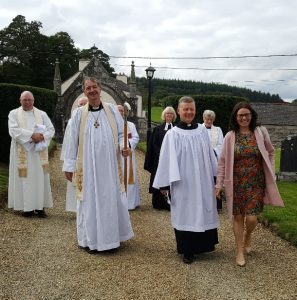 He said that although faith was a private matter in Leinster House, it did “find expression” in the early years working up to the Good Friday Agreement. He said that people from different political walks of life, in Northern Ireland and the Republic of Ireland, and in Britain, America and South Africa are able to communicate based on their common Christian faith.

He stated that he felt the call to ministry many years before he became a politician, in secondary school. He sees his role as deacon as fundamental to everything because it is to “replicate and follow the example of Christ as a servant”, so when someone become a priest or minister at a later point they do not stop being a deacon.

He lost his North Dublin seat in 2011 and later moved to Co. Wexford with his wife, Áine Neville, where they have become involved in organic horticulture.

More than 300 people gathered on Saturday 26 August in Shillelagh Parish Church for his ordination as deacon by Bishop Michael Burrows. He becomes the Reverend Trevor Sargent and will serve in the Tullow Group of Parishes with their rector the Venerable Andrew Orr, Archdeacon of Ossory & Leighlin.