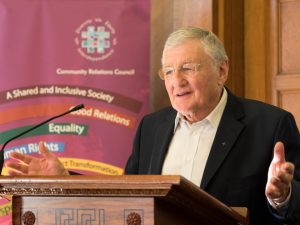 The Methodist clergyman who oversaw the decommissioning of IRA weapons has helped negotiate a deal to bring about an end to a dispute over a controversial Orange march in north Belfast.

The parade in Ardoyne has been the scene of controversy for a number of years.

A joint statement issued by Rev Harold Good and Derry businessman Jim Roddy, who also helped negotiate the settlement said, “We are pleased to announce that a local agreement has been reached to bring an end to the difficulties surrounding parades and protests in the Twaddell/Crumlin Road areas.”

The historic agreement has been hailed by the UK and Irish governments and Stormont’s political leaders.

A 24/7 loyalist protest camp was set up at the sectarian interface in 2013 when the Parades Commission – a government-appointed adjudication panel for controversial marches – prevented Orangemen belonging to three Orange lodges passing the nationalist Ardoyne along the Crumlin Road as they returned from traditional Twelfth commemorations.

Nightly protests were held in the nearby unionist Woodvale/Twaddell area in the years since, with a protest parade every Saturday. The policing operation at the site has cost in excess of £20m over the past three years.

The agreement will see the Orangemen complete the outstanding leg of their 2013 parade next Saturday morning at 8.30am.

The Orangemen’s accompanying bands will only play hymns as the parade passes the disputed stretch of the Crumlin Road while the lodges will limit the number of banners they display.

In return, Cara will not apply to the Parades Commission to protest at the parade.

Once the parade is completed the loyalist camp at the interface will be dismantled and all associated protests will end.

Going forward, the lodges have agreed not to apply for any more return parades on the Twelfth until a wider agreement on the issue is reached. Cara will not protest at the lodges’ already permitted outward parade on the morning of the Twelfth.

A local community forum including representatives of Cara and the loyal orders will also be convened with the aim of improving community relations in the area.

The agreement stated, “Both parties commit to implementing the complete package of measures in good faith; and in a spirit of genuine respect and co-operation commit ourselves to working towards a common, peaceful, shared future for all.”

“The understanding they have reached is a welcome development and is a significant step given this has been an initiative between the Orange and local residents,” she said.

“I said at the start of the summer that we all have a responsibility to show leadership and to continue to seek resolutions to contentious issues through discussion and to ensure any difficulties are identified and resolved peacefully. By doing so we become stronger as a community and a country.

“I thank all those involved. We want to build a future that is respectful, inclusive and vibrant. Northern Ireland can have a very bright future built on respect and celebration of diversity.”

Deputy First Minister Martin McGuinness said, “We must resolve disagreements regarding parades, identity, culture and tradition through dialogue so that difference is celebrated and respected.”

“The next phase of our political and peace processes must be the development of a real reconciliation process.”

“As leaders we will work with Executive colleagues to ensure tolerance, equality and mutual respect are key tenets of our new shared future.”