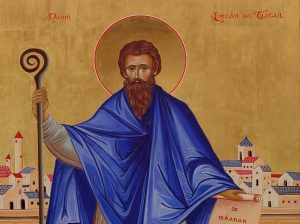 When the Dublin Archdiocese celebrated the feast of St Laurence O’Toole in the Pro-Cathedral on Thursday last, the Mass proved to be full of additional significance for Ireland’s most populous diocese.

Archbishop Diarmuid Martin said it was “a happy coincidence” that the votive Mass for Dublin’s patron saint was also the day when the archdiocese expressed its “gratitude and respect” to Bishop Eamonn Walsh and Bishop Ray Field, two of the diocese’s auxiliary bishops who retired this week.

The Mass also marked the ordination to the diaconate of Frank Drescher, who is preparing to be ordained a priest.

“There is a sense in which our Mass today is a sign of the continuity of the mission of the Church and the way that the message of Jesus shows its relevance from one generation to the next,” said Archbishop Martin. “Over the years, the Church finds renewed strength and the strength of renewal through the self-giving witness of its faithful ministers.”

Dr Martin also used the Mass as an opportunity to announce that the Dublin Archdiocese will be celebrating the legacy of its “forgotten Archbishop” next year. Next year, 2020, will be the hundredth anniversary of the appointment of  Dr Edward J Byrne as head of the diocese.

“He was in fact a remarkable man, having been a curate here in this Pro-Cathedral Parish from 1902 until he became bishop. At that time, part of this parish was one of the worst slums in Europe and he was renowned as a visitor of the homes of the poor. He was curate here at the time of 1916 and the War of Independence. As Archbishop when Civil War threatened he did everything he could to avoid its outbreak.”

During his time in office, Archbishop Byrne was responsible for building many schools and parish churches. Serving until his death in 1940, two highlights of his episcopacy were the celebration of the centenary of Catholic Emancipation in 1929 and Dublin’s hosting of the Eucharistic Congress in 1932.

He was succeeded by Archbishop John Charles McQuaid, who had such an impact on Irish society from 1940 to 1972 that Archbishop Byrne’s works have been overshadowed, which is why a biography of him, by Thomas Morrissey, is entitled Edward J. Byrne, 1872-1941: The Forgotten Archbishop of Dublin.

Last week, Archbishop Martin said that St Laurence O’Toole might be described as “the forgotten Irish saint”. “We all know his name, but perhaps we know little about him,” he commented.

Laurence O’Toole had been abbot of Glendalough when he was called upon to become Archbishop of Dublin at a time when there was much conflict between the native Irish and the recently arrived Norman settlers. In addition to being a peacemaker, Archbishop Martin said Laurence O’Toole was a friend of the poor,  a reformer of the clergy and an ascetic who fasted and did penance regularly.

Known as Lorcán Ua Tuathail in Irish, Laurence attended the Third Lateran Council in Rome in 1179, at a time when travel across Europe was perilous. A year later he travelled to Northern France to mediate with the Norman king, Henry I, but he became ill during his travels and died in the town of Eu, in Normandy, where he is much venerated.

Archbishop Martin concluded his homily with a prayer to Dublin’s patron saint. “We pray that through the intercession of Saint Laurence O’Toole our Church in Dublin will be renewed in holiness. We pray that the Spirit will guide the Church to witnessing how the message of Jesus Christ can renew the culture of the times in which we live. This occurs when the Church becomes an uncompromised witness of self-effacing generosity and service above all to the poorest.”