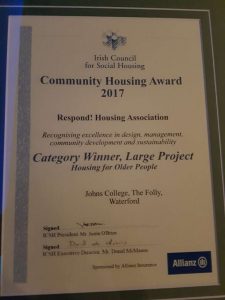 A former seminary in Waterford City which has been developed into a housing development for older people by voluntary housing agency Respond! has won a major award.

These awards showcase the best in housing for older people, homeless projects, housing for people with disabilities, for families, regeneration, collaboration initiatives, community integration and housing management. Twenty five housing schemes were shortlisted under these seven categories and nine awards were given in total.

The ICSH Community Housing Awards, sponsored by Allianz, is a biennial competition that celebrates excellence within the social housing sector, showcasing housing quality, innovation and partnership. The awards serve to demonstrate that good housing is the cornerstone to building diverse, sustainable and inclusive communities.

Speaking at the awards ceremony Dr Donal McManus, Chief Executive of the ICSH, said that against the backdrop of acute housing need and increasing homelessness, the 2017 awards help shine a light on the exceptional work that is ongoing throughout the country. He added “These project awards are very much local responses to local housing need and they reflect the diversity and innovative work of housing associations, housing cooperatives and local authorities across the country. The entries and winners for the 2017 Biennial Community Housing awards are some of the highest quality since the awards began in 2003. The spread of entries and shortlisted projects from new builds to regeneration and the re-use of vacant properties, are a strong signal of what can be achieved for people in need of social housing”.

The category winners were announced and presented with their awards at the ICSH National Social Housing Conference on 27th September 2017 in the Limerick Strand Hotel.

The Respond Housing Charity was founded by the Franciscan Order and Fr Pat Cogan OFM in Waterford in the early 1980s. St John’s College near Waterford city closed as a seminary in 1999 and was later taken over by the Respond! voluntary housing agency. The housing development for older people which was opened by Respond! at St John’s College in 2015, includes 21 new apartments in the college itself, with a 10-bed group home and 36 new one-bed apartments in an adjoining building.