Republicans and trade unionists call for No at GPO 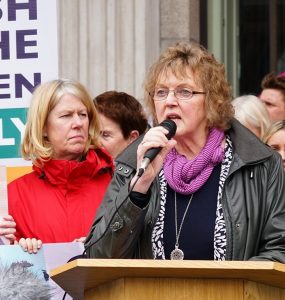 A grand-niece of Proclamation signatory Éamonn Ceannt joined a gathering of Republicans and trade unionists on the anniversary of the 1916 Rising to call for a No vote in the upcoming referendum.

Judy Ceannt, a GP from Carrick-on-Shannon, spoke of the pain experienced by unborn babies during abortion.

“The Taoiseach said on Saturday that it is time to put compassion at the centre of our laws by voting Yes in the upcoming referendum. What is compassionate about killing the youngest, most vulnerable members of our society?” she asked.

“Late abortions are gruesome and painful to the baby, and even at 12 weeks, during a surgical abortion you can see on the ultrasound that the baby is in distress until it dies.

“Surely as a doctor, the Taoiseach knows that ‘First do no harm’ is the basic law that governs us doctors,” she continued. “When a pregnant woman comes in to me, I have two patients. The woman and her baby. I am not meant to harm, let alone kill either. The Taoiseach want us GPs to become abortionists. Abortion is not healthcare.”

Mairead Hughes, Chair of ‘Cherish all the Children Equally’, which together with ‘Trade Unionists for Life’ organised the demonstration, recalled that “102 years ago nationalists, republicans, trade unionists, feminists, doctors, poets and artists authored and read aloud the Proclamation of the Irish Republic. This proclamation set forth a progressive vision for a new independent Ireland. At the heart of the Proclamation is the objective to ‘cherish all the children of the nation equally’. This objective is also at the heart of our Human Rights Campaign,” she said.

Former Sinn Féin Councillor Anne Brolly from South Derry, lamenting the fact that citizens in the North of Ireland could not vote on “the most important human rights debate of our generation”, called on her “fellow Irish Citizens in the 26 counties” to stand up for their northern comrades and friends and vote No. “The majority of nationalists in the north are prolife. The majority of all citizens in the north are prolife. We urge you not to be silent in this key campaign.”

Gina O’Brien, a trade unionist from Cork City, said taking the Eighth Amendment out of the Constitution would not make women safer in pregnancy. “The reality is that a doctor, confronted with a perfectly healthy woman with a perfectly healthy pregnancy, can be asked by law to either kill the unborn child, or ask someone else to do so. I believe a trade union’s priority should be to protect members in the health service.”

Underlining the “inequality” of excluding men from the debate, she said many trade unionists supported the right to life but were forced to hide their views. “Three years after the Marriage Referendum, has society swapped one closet for another?” she asked.

A Sinn Féin Councillor from Kildare, Íde Cussen, described herself as a “survivor of an abortion regime” in England. Ms Cussen’s mother, who had had three Caesarian section deliveries in the UK, was repeatedly advised to abort her baby and eventually left the UK to have Íde in Ireland. “What country takes away a human right from their Constitution? They [the unborn] are to be considered a life worth less, a dependent vulnerable preborn child to be cast into the bin as clinical waste.”

One of the “taboo issues” that people are not allowed to discuss is how abortion hurts women, she said. “Relationships and families in towns and villages in Ireland struggle and break under the pressure of this silent sadness. The women are accepted as the collateral damage of the abortion industry. The are an inconvenient truth that must be brushed under the carpet like modern day Magdalene laundry women.”