Concern over projections for Dublin archdiocese 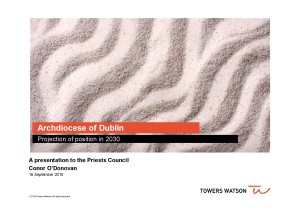 Projections for the possible future of the archdiocese of Dublin in relation to priest numbers, Mass attendances and participation in other sacraments may provide “a strong indicator” of where the diocese is headed according to the Chairman of the Priests Council.

Fr Gareth Byrne, a lecturer in Mater Dei, admitted to CatholicIreland.net that most people find the findings of the Towers Watson Report “a little unsettling” but added that it was “proving to be very useful in helping us to look more carefully at the realities and think about what planning needs to be put in place”.

Fr Gareth Byrne, Chair of the Dublin Diocesan Council of Priests, said the Council see the report as an opportunity for deep reflection “rather than just a focus on stark statistics”. He added that it was an “important attempt to be pro-active rather than simply allow the situation to drift”.

Members of the Priests Council in Dublin have said “they accept the findings as a strong indicator of where we seem to be heading” according to Fr Byrne, although the Council does not, however, see the projections as a fait accompli.

The research predicts a drop of between 61 and 70 percent in the number of priests in active ministry by 2030.

The report, which was compiled on behalf of the Diocesan Priests Council, sets out the future trends for ministry and personnel numbers over the period 2014-2030.

The best case scenario predicts a decline in priest numbers of 61 percent, from 369 priests down to 144, provided religious orders maintain their current level of commitment in parishes in the diocese.

However, if religious orders were to relinquish the parishes they currently serve, due to the ageing profile of their own priests, the drop by 2030 would be 70 percent leaving just 111 priests carrying out parish ministry across Dublin’s 300 parishes. 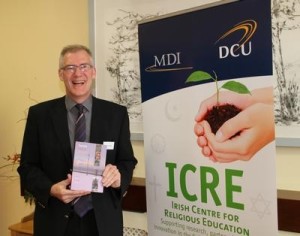 Currently in Dublin there are 276 diocesan priests and 110 priests belonging to religious orders totalling 386 under the age of 75 as of 2014. Another 33 priests are aged between 75 and 80.

Other study findings predict that just one new priest under the age of 40 will join the priesthood in Dublin every year up to 2030.

At the other end of the scale, 57 percent of the current priests serving in Dublin are over 60 years of age and this is projected to increase to 75 percent by 2030.

The study warns of greater strain on younger priests with an increased workload as only 25 percent will be under 60.

Other research findings include a predicted drop in Mass attendances by 33 percent by 2030.

While baptisms, communion and confirmations are predicted to remain stable over that period, the study predicts an average annual reduction in church marriages of 4 percent.

Some of the potential options which the diocese will discuss is the possibility of recruiting new priests from overseas, reducing the number of Masses on offer, and allocating more work to volunteer lay people, as well as “making it increasingly attractive to priests who are over 75 to remain involved in some capacity”.

At the moment the findings of the Towers Watson Report are being discussed in the deaneries and by members of parish pastoral councils around the archdiocese of Dublin.

Fr Byrne told CatholicIreland.net, “It is hoped that lay people will have a strong voice in responding to the task in hand.”

He said the future will certainly involve parishes working more closely together for mission, sharing personnel, pastoral programmes and liturgies.

“It is hoped that the Report can stimulate a worthwhile discussion in the Diocese which can produce forward looking advice for the Archbishop, priests and people to act on in their own areas of responsibility.”

“The hope is that by addressing the reality as set out in the Report, by openness to every member of the church in their needs and with their gifts, by planning together to use our resources well, by highlighting the essential message of Jesus, we can draw people into a new conversation about church and what we offer each other in following Christ.”

He said the central questions the Council of Priests is focused on in responding to the Report are:

– How do we sustain and develop the faith life of people in our diocese and parishes in the coming years?

– How do we make the best use of our pastoral resources in planning for the future?

According to Fr Byrne it is clear already that people appreciate the need to lighten the burden of the fewer priests into the future.

While many younger adults do not participate every Sunday in parish – he noted that they are still interested in initiating their young people into the church through baptism, confirmation and first Eucharist.

“Many priests and laypeople are looking for ways to build on this, responding to pastoral opportunities as they arise, supporting parents in taking their responsibilities personally, and seeking to ensure there is a welcome when people return. The Year of Mercy provides a good context for this ‘new evangelisation’.”

He said the conversation, therefore, is focused on “how we as a faith community in the Diocese can work together to revitalise local Church communities, reawakening parishioners to the gift and call of baptism, reflecting on what it means to be ‘intentional disciples’ of Jesus, and developing within the community again the desire for priestly vocations”.

“We are interested in hearing about initiatives and programmes engaging with people who might consider a vocation to priesthood or religious life. We are interested too in helping people take an initial step into a more active parish life – through, for example, liturgical ministry, catechetical programming and social outreach.”

He also highlighted that:

Responding to the research findings, Fr Brendan Hoban of the Association of Catholic Priests said the “Most that can be said for the report is that it was an interesting exercise though its conclusions are entirely predictable.”

He told CatholicIreland.net, “It is based on a very limited view of priestly ministry as exclusively liturgical and is an exercise in identifying what deck-chairs might be moved on the Titanic while accepting that it’s only a matter of time until the whole enterprise disappears under the water. It is effectively a management plan for closure,” Fr Hoban criticised.

“Its solutions to the crisis are contained within a narrow vista and are not just unrealistic but unacceptable, particularly the disrespectful presumption that persuading priests over 75 years of age to continue working is worthy of serious consideration. Or that importing priests is a realistic solution, when the cultural difficulties involved are so obvious.”

The ACP co-founder the value of the report is its implicit though unstated acceptance that unless leaders of our Church recognise the limited window of opportunity available to the Catholic Church to stem the tide and are prepared to make the necessary decisions to chart a more realistic response the Catholic Church in Ireland will have virtually disappeared within two decades.

“The ACP reaffirms again its belief that a necessary response at this juncture to the present crisis is the ordination of married men, an invitation to priests who have left the active ministry to return and the ordination of women deacons.”

He concluded, “Unless these decisions are faced and a realistic conversation takes place history will not forgive those who conspired to avoid their responsibilities.”