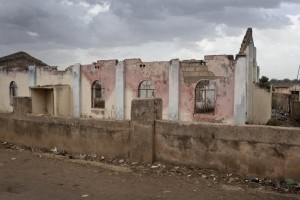 The findings are published in a new report by Open Doors, an organisation that advocates on behalf of persecuted Christians.

It also reveals that 13,000 churches have been closed or destroyed over the past 15 years.

In its assessment of the situation of Christians in northern Nigeria, the report states that the environment has become ever more hostile in recent decades, leading to growing marginalisation and discrimination, as well as widespread attacks on Christians, especially in the last fifteen years.

“Not just radical Islam, Boko Haram being the most notable example, but also Muslim Hausa-Fulani herdsmen and the northern Muslim political and religious elite are also major actors of targeted violence towards the Christian minority,” the report states.

“Moreover, Christian communities in Sharia states especially but also in other parts of northern Nigeria face the challenge to withstand the pressure of an environment that marginalises and discriminates.”

It describes Nigeria as a country torn in two.

Christians living in these areas especially have been bearing the brunt of this violence and insecurity.

With an estimated 30 million adherents in the region, it is the largest minority in a mainly Muslim environment.

Even though Nigeria is a secular state with a constitution that guarantees freedom of thought, conscience and religion, the reality in Northern Nigeria is radically different according to Open Doors.

“For decades, Christians in the region have suffered marginalisation and discrimination as well as targeted violence. This is happening not only in the Sharia states of the Far North where the pressure of Islam is hard felt, but also in the non-Sharia Middle Belt states where Sharia has not been formally implemented.”

In several areas in Northern Nigeria, the Christian presence has become virtually extinct or substantially diminished while in other areas church congregations have grown due to an influx of Christians fleeing violence and a number of Muslims converting to Christianity.

To add to this, social cohesion between Muslims and Christians has been severely affected.

Mutual trust has disappeared and Muslims and Christians have become increasingly separate groups, clustering together in town suburbs and distinguished rural areas.

There can be religious, political, economic and social undertones at the same time.

Drivers of targeted violence against Christians in Northern Nigeria are connected through a common religious denominator: defending northern Muslims’ interests, Muslim identity and the position of Islam.

The report’s conclusions are summarised as follows:

According to Open Doors, the challenge for the Church in Northern Nigeria is also much larger than previously thought.

It will have to find a way to exist in areas where the Christian presence has become virtually extinct.

It will have to deal with traumatisation as a result of continued violent attacks. It will need to provide leadership and guidance to Christians on how to deal with and respond to the violence.

Christian communities in Sharia states especially but also in other parts of Northern Nigeria face the challenge to withstand the pressure of an environment that marginalizes and discriminates.

Nevertheless, there is still a large Christian presence in Northern Nigeria with potential to unite and stand strong.

But the Church in Northern Nigeria will need to find a way to not close in on itself and disengage from society.

It should do the opposite, stimulated by its Christian drive to be involved in society and work for justice, peace and reconciliation by sharing its resources to the benefit of all.