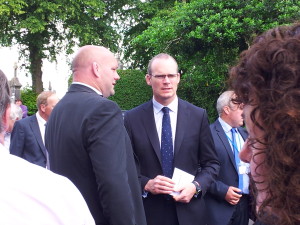 Families of those who died in farm accidents in Ireland gathered for a special ecumenical remembrance service at the Most Holy Rosary Church in Abbeyleix, Co Laois on Sunday.

Over 700 people, including rugby stars Sean O’Brien and John Hayes, attended the service, which was led by Bishop Denis Nulty of Kildare & Leighlin and Archdeacon Wayne Carney.

It was organised by Embrace FARM, which was founded by Co Laois farmer Brian Rohan, whose father Liam died in an accident on the family farm in 2012. The group acts as a support network for families affected by farm deaths.

The Minister for Agriculture Simon Coveney and his counterpart from the Northern Assembly Michelle O’Neill were among those who attended Sunday’s service.

They jointly presented a wreath as a mark of respect to the 30 people who died last year in farming accidents, an 87% increase on 2013. So far this year, seven people have died in farm accidents.

Brigidine Sister Eileen Deegan gave a talk, as she wove from scratch a St Brigid’s Cross, on the sense of devastation, loss but also support for those affected by farm accidents.

Over 100 names submitted by those bereaved by farming accidents over the years were read out.

Diane Banville, a mother of two from Co Wexford whose husband Kevin Banville died in an accident on St Patrick’s Day last year, read a heart rending reflection on the irreplaceable loss of loved ones.

“We know that there are no words we can say at this moment to express what we are feeling, no words that can alleviate our sorrow or take away the pain, the emptiness, the anger and the despair, the loneliness, the fear and the uncertainty, which at times still overwhelms us,” the reflection read.

Speaking after the service, Brian Rohan of Embrace FARM said, “Today was an opportunity for people who have suffered terribly as a result of farm accidents to come together in solidarity and support.”

“There was an awful lot of collective pain in the Church but in coming together like this we just hope that it can help with the healing process, which is an ongoing one.”