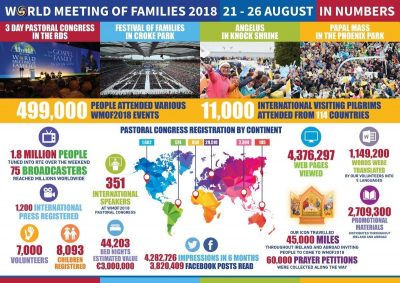 Some 1.8 million people tuned into the national broadcaster, RTÉ, to view coverage of the World Meeting of Families (WMOF) and the visit of Pope Francis  to Ireland.

Worldwide viewers were serviced by 75 broadcasters who beamed images to millions across the globe.

While there was much debate as to the numbers of pilgrims who attended the events of WMOF between 21 and 26 August 2018, the figures collated as WMOF wound down its operations show that 499,000 attended the wide variety of events. These included the three-day Pastoral Congress at the RDS, the Festival of Families at Croke Park, the Angelus at Knock Shrine and the Papal Mass in the Phoenix Park.

There were 11,000 international pilgrims from 114 countries present at those events and 1200 international members of the press were registered. There were 351 international speakers at the pastoral congress, and 1.14 million words were translated by volunteers into 5 languages. The many visitors availed of 44,203 bed nights worth an estimated €3 million to Ireland.

In the lead-up to WMOF the special icon travelled 45,000 miles to parishes throughout Ireland and abroad and some 60,000 prayer petitions were collected along the way. Some 2.7 million promotional leaflets were distributed.

Behind the numbers are the impressions and reflections of the many who attended what was labelled the biggest event in Europe in 2018. Everyone from volunteers to choirs and pilgrims have their own memories.

Declan O’Brien, who with his wife Sarah spoke at the pastoral congress about handing on the faith as grandparents, recalled the Papal visit and said: “For me the actual visit was wonderful. As well as being joyful it was penitential, and those two things combined were important.”

Declan O’Brien, who is in the Kidare & Leighlin Diocese and involved in Focolare New Families, an ecclesial and ecumenical movement, was also struck by the build-up to WMOF. “All the lead up to it, all the preparation, the conversations that took place in parishes around Ireland, and even before the year is over I see a follow-up – there is going to be a lasting effect,” he told Catholicireland.net.

“Parishes and dioceses and movements are seeing what we can do for families because we are up against it and he [Pope Francis] let us know we are up against it, so it is good that we work together. I think he encourages us to do this in every way, both by admitting our imperfections and with celebrating family life,” he said.

Irish Bishops have also been reflecting on WMOF in their Christmas messages. Bishop Tom Deenihan of Meath stated: “The Diocese of Meath was well represented in terms of the choir, volunteers and at the Festival of Families in Croke Park. The event was a memorable festival of faith and the testimonies of the families in Croke Park were particularly memorable. I thank most sincerely those who contributed their time, talents and resources in making the event the success that it was.”

“Sadly, he had some detractors. Nevertheless, his spiritual wisdom along with his warmth, compassion and courage lifted our hearts and we are thankful. We pray for him as he seeks to meet the many challenges that failure of leadership has inflicted on many church communities,” he stated.