Home > Featured > “To remember the dead is important to the practice of our faith.”

“To remember the dead is important to the practice of our faith.” 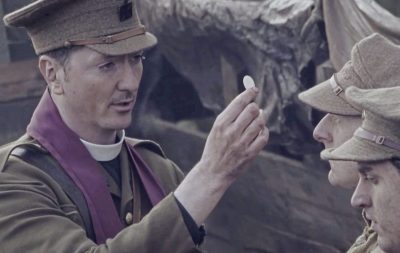 A scene from “Bravery Under Fire”, with Fr Willie Doyle SJ played by Brian Milligan.

Irish Catholics and Protestants fought and died side by side in World War I, a fact that has been largely forgotten because of Ireland’s own political and religious conflicts.

That was the theme of a Remembrance Sunday sermon given yesterday at St Anne’s Cathedral, Belfast, by Archbishop Eamon Martin of Armagh.

It was the first time a Catholic primate of Ireland had taken active part in a Remembrance Sunday service at this venue – an indication perhaps of how one religious community in Northern Ireland proclaimed the loss of a generation of young men, “the Sons of Ulster, while the other religious community did little to acknowledge it.

“People preferred to cling on to a history of difference and separation, rather than recognise and embrace our shared story of common suffering,” said the Catholic church leader, whose own uncle, Edward Martin, lost his life in the battle of Passchendaele.

In recent months and years, Archbishop Martin has participated in a number of events commemorating those who died during the Great War of 1914–18. Earlier this year, and in 2016, he and the Church of Ireland Archbishop of Armagh, Richard Clarke, visited the war cemeteries of northern France and Belgium and laid wreaths at the Menin Gate in Ypres.

These visits, he said, had opened his eyes “to the grief and suffering that was shared by families of all traditions and from every part of Ireland”. The Peace Park memorial in Messines records the number of Irish dead, missing and wounded on the Western Front: 33,000 from the 36th Ulster Division, 28,000 from the 16th Irish Division and 9,000 from the 10th Irish Division.

Last month, in Rome, Archbishop Martin launched Bravery Under Fire, a documentary film about Dalkey priest Fr Willie Doyle who was chaplain to the Royal Dublin Fusiliers and who died in Passchendaele in 1917 while trying to rescue two men trapped in no man’s land.

“Although standing at war memorials, wearing poppies, laying wreaths and the ‘Last Post’ may not have been part of my tradition or upbringing, to remember the dead, to honour and pray for them – especially during the month of November – is important to the practice of my faith,” said the Archbishop. “In recent years I have grown to understand more fully that, whilst we may remember in different ways, and whilst our forebears had differing and often conflicting approaches to the war, what unites us now in their memory is so much greater than anything that is talked up to divide us.

“Can we learn from their shared sacrifice, a full century after the so-called ‘war to end all wars’? They have bequeathed us a shared responsibility for healing the past and building lasting trust and peace. Peace is not merely ‘ceasefire’ or the absence of violence and war. Peace is an ongoing work of reconciliation, justice and hope: it means coming out of our own trenches; building bridges, not parapets; ‘beating swords into ploughshares, spears into pruning hooks’.

“Jesus said, ‘Love one another as I have loved you’. Peace is the fruit of that love which urges us to uphold the value and dignity of every human life and to be passionate about respecting others, especially those who are poor or marginalised. Our hope remains for a lasting peace on the island of Ireland. May Christ, the Prince of Peace, help us make that hope a reality for the youth of today and tomorrow,” Archbishop Martin said.