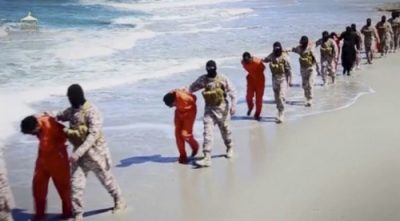 Libyan authorities have located a mass grave containing the bodies of 34 Ethiopian Christians who were murdered in 2015 by Islamic militants.

The grave has been found near the coastal town of Sirte, where jihadists belonging to the Islamic State organisation, also known as ISIS or Daesh, were videoed in 2015 leading groups of Ethiopian Christians along a nearby beach.

The grisly video, posted on social media just over three years ago, showed the prisoners being beheaded and shot in the back of the head. Accompanied by slogans promising death to “nations of the cross”, the video also included images of churches, icons and Christian tombs being destroyed by jihadists claiming to belong to ISIS.

The 34 victims of the massacre were Ethiopians migrants attempting to escape poverty in their home country by making their way to Europe. The migrants were believed to be in Libya to find traffickers to smuggle them across the Mediterranean Sea.

The Vatican news agency Fides reported that the Libyan authorities say the bodies, which were located on 23rd December, will be repatriated to Ethiopia, once due national and international legal procedures have been carried out.

These victims are part of the growing number of Christians suffering violence and persecution at the hands of Islamic militants. In 2015, 20 Egyptian Coptic Christians were massacred in a similar attack by ISIS. Last year, across the globe, 40 Christian missionaries were killed, almost double the number murdered in 2017.

Sadly, ISIS militants are still active in Libya. On Christmas Day, a suicide bomber attacked the foreign ministry offices in the capital Tripoli, killing three people and injuring 21 others.