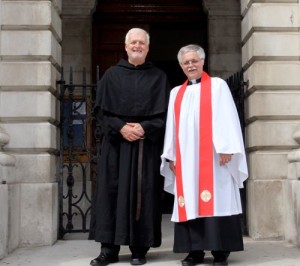 It was the key event of a new initiative, the Ecumenical Bible Week (EBW).

The EBW itself is a fruit of the significant ecumenical dimension, which marked the 50th Eucharistic Congress.

As a continuation of that collaboration, the Rev Ken Rue, a priest of the Church of Ireland, came up with the idea of an Ecumenical Bible Week, that is to say, one week in the year when the different traditions would read, pray and celebrate the Bible together.

An executive across the traditions was formed and a programme devised.

This year, all the churches celebrated Pentecost on the same day and so the EBW took place from Pentecost to Trinity, under the title “Together in one place: exploring the Bible again for the first time.”

The key event on Thursday was entitled ‘Thinking Allowed’ which saw six leaders and representatives of different traditions speak of the Bible in their own personal experience.

The topic set for each five-minute presentation was: “How I have come to appreciate the Bible in my own journey of faith?” with an invitation to mention any passages of special significance for each speaker.

As the leaders and representatives are more known in their official roles, it was insightful to hear each one speak of his or her own journey of faith and the role the Bible continues to play on that path of discipleship.

The contributions were short, profound and very moving.

Fr Mikhail Nasonov related his own story of growing up in Soviet Russia. It was only when he was 18 that he, in a way, stumbled across the Gospel.

While in the Military Academy, he was reading Dostoyevky’s Crime and Punishment and he discovered the teaching and person of Jesus through that novel.

This led naturally to a reading of the New Testament. The reading of the Gospels and, in particular, the story of the raising of Lazarus brought about Mikhail’s conversion to Christ, and eventually to his ordination and to his present posting in Dublin’s Russian Church of the Holy Apostles Peter and Paul.

The word from Archbishop Jackson at the end was, “Do this again, even with the same people.”

The success of the first EBW encourages the executive to dream of an annual Ecumenical Bible Week in or around the feast of Pentecost.Our thanks to all who made it possible!

The full programme of events may be viewed on www.bibleweek.ie