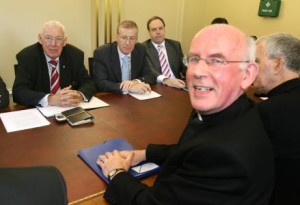 The retired Primate of All Ireland, Cardinal Sean Brady, has paid tribute to Ian Paisley following his death on Friday.

Cardinal Brady, who was the first Catholic Primate to meet the controversial political and religious leader in 2006, told RTE Radio that without Dr Paisley, “peace would not have been delivered”.

Speaking on News at One on Friday, the Cardinal said the bigger challenge now for Northern Ireland “is to deliver reconciliation after the peace has been made”.

Dr Brady met the founder of the Free Presbyterian Church both for inter faith and cross community reasons and recalled him as “warm and welcoming”.

Asked about Ian Paisley’s heckling of St John Paul II in 1988 when he addressed the European Parliament, when he denounced the pontiff as the antichrist, Cardinal Brady acknowledged, “He was a man who had very strong religious views and moral views.”

On that occasion, Rev Paisley was removed from the chamber by some of the members of parliament as he continued to shout, “I refuse you as Christ’s enemy and Antichrist with all your false doctrine.”

Cardinal Brady underlined that Ian Paisley had over the years “moved”.

“That is the point – he moved. He was an important player in public life in Northern Ireland for 50 years and without him peace would not have been delivered, that is my conviction.”

Asked whether he held a theological debate with Dr Paisley at his first meeting, the Cardinal said there had been no theological discussion.

“He made it quite clear that the meeting was not ecumenical – it was social and political affairs,” Cardinal Brady recalled as he explained that he attended the meeting as a member of the Catholic Commission for Social Affairs.

“In that context we respected each other and I think he listened carefully.”

After the meeting, Dr Paisley went on to enter into the NI power-sharing agreement which Cardinal Brady said “has delivered a lot of positive things for this country.”

When RTE presenter, Richard Crowley, questioned the Cardinal as to whether he would describe the deceased 88-year-old former DUP leader as a good Christian, he responded, “He was certainly very fervent and strong in his beliefs. But of course I know there were other less positive aspects of his relationship of the Catholic Church and the pope – they are more complex.”

Dr Brady said that as he hadn’t lived in Northern Ireland at that time and he therefore felt it was for others to pronounce on this.

Separately, Bishop Noel Treanor of Down and Connor paid tribute to Ian Paisley’s “principled stand on marriage, family and sanctity of human life at all stages”.

“Whilst his historic legacy in terms of his interaction with the Catholic community was at times controversial, his contribution to the search for peace and political stability in Northern Ireland was, in the end, crucial,” Bishop Treanor said.

“He made an immense contribution to local, Westminster and European politics and will be particularly remembered by his local constituents, from all sections of the community, for his commitment in representing their concerns.”

Bishop Treanor continued, “Dr Paisley has left an indelible mark on the history of the relationship between the Unionist and Nationalist traditions on this island. I will hold his family and all those affected by his passing in my prayers at this time of loss.”

In a statement on Friday, the Church of Ireland Primate of All Ireland, Archbishop Richard Clarke said, “Whereas Lord Bannside’s political career was certainly controversial he will nevertheless be remembered as a fair-minded constituency MP who worked hard for all his constituents.”

He added, “The legacy for which he will be most generously remembered will be his work in more recent years in progressing partnership government in the Executive of the Northern Ireland Assembly.”

In a statement, President Michael D Higgins said he had heard with sadness of the passing of Dr Paisley.

“Dr Ian Paisley was a man of deep convictions. Irrespective of one’s political perspective, Dr Paisley was undoubtedly a man of immense influence on the contemporary history of this island,” the President said.

“His early career was characterised by an uncompromising position of a constitutional kind. However, his embracing of the change necessary to achieve a discourse that might lead to peace was of immense significance, as was his commitment to building relationships in support of that peace.”

Dr Paisley founded the Free Presbyterian Church in 1951 and stepped down as Moderator in 2008 but continued to preach at his church on the Ravenhill Road in Belfast until 2011.

In November of that year he broke the news to his congregation in the Martyrs’ Memorial Church in Belfast that he would be retiring to concentrate on writing his memoir.

Born in Armagh, Dr Paisley was brought up in Ballymena where his father James Kyle Paisley was an independent Baptist pastor.

He trained at the Barry School of Evangelism (now called the Evangelical Theological College of Wales), and later, for a year, at the Reformed Presbyterian Theological Hall in Belfast, before becoming a founder of the Free Presbyterian Church.

From four congregations in that first year, the growth of the Church continued until it spread to all parts of Northern Ireland.

It has now spread well beyond that and there are over 100 Free Presbyterian churches and extensions throughout the world in Northern Ireland, England, Scotland, Wales, the Ireland, Australia, Canada, USA, Germany, Jamaica and Spain, with missionaries in many other places.

Rev Paisley formed the DUP and led it from 1971 until it became the largest party in Northern Ireland, after the 2005 Westminster election, overtaking the Ulster Unionist Party.

He was First Minister of Northern Ireland until retiring from politics in 2008.

Known for his strong and sometimes divisive views on politics and Catholicism, one of his most recent protests had been against Pope Benedict’s visit to Britain in 2010.

However, Dr Paisley is remembered for the later period in politics when he worked closely with NI Deputy First Minister, Martin McGuinness.

When Rev Paisley stepped down from the post, Martin McGuinness said that working with him in the Stormont Executive was, “a unique and remarkable experience.”