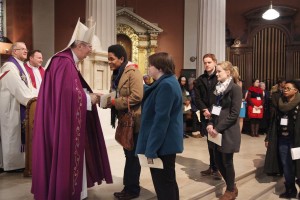 Archbishop Diarmuid Martin greets people at the ceremony of the Rite of Election of Catechumens for the Easter Sacraments and Recognition of Candidates for reception into full Communion with the Catholic Church. Pic: John Mc Elroy.

One of the “discreet signs of hope” for the Irish Church is the seventy new catechumens or adults who are preparing for baptism at the Easter Vigil the Archbishop of Dublin has suggested.

In an address at St John’s Parish in Tralee on Tuesday evening, Archbishop Diarmuid Martin said what was important about the ceremony was that those who participated in the Rite of Christian Initiation of Adults had been accompanied in their own parishes over a lengthy period.

In that time, the faith of the catechumen was enriched and developed and accompanied by the faith of a local parish community.

He said this was evidence of a willingness of Christian families to be more actively engaged in the transmission of the faith and the catechetical life of the parish community.

Admitting that there are parishes in Ireland which remain trapped in a past which has long since ceased to exist, the Archbishop said what sets a parish on the road to renewal is ‘community’.

In Dublin, lay men and women, working with priests and deacons, are building up new forms of parish community life and helping parishes to work together for the mission of the Church.

The deaneries are moving from being clerical gatherings into focal points for looking at the pastoral needs of an area.

There are new forms of collaborative ministry in preparation for the sacraments, in the charitable works within the community, in child safeguarding and many others areas. 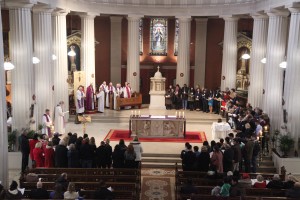 There are new examples of reaching out to those who have drifted away from the Church.

“All of these together are creating a new image of the Church, not a Church preoccupied with its internal workings, but one which must reach out in service and in evangelisation,” the Archbishop suggested.

He called for the development of a true sense of community in the Catholic Church today and for the Church to move away from a Catholicism which individualistic.

“The future of the Church in Ireland will depend not just on individuals, bishop or priests or charismatic lay men and women, but on new and robust communities of faith and worship. We urgently need faith communities which embrace our young people,” he said.

“I find it curious on many occasions that those who are most vocal in their criticism of the internal workings of the Church are those who have really long-since given-up on any real participation in a believing community,” he criticised.

Yet people still expect and want the Church to speak out on social issues he said, but this criticism of society from the side of Church leaders will be welcomed often only in those areas where such criticism is the flavour of the day and not on certain others issues.

“There is a tendency to want to forge an image of the Church which fits in to the social patterns of the day.”

“We must remember that ethical teaching cannot be reduced to an ethic which makes people feel comfortable; it must challenge people to move away from acquiescence.”

Dr Martin said the message of Jesus Christ is a message which must combine idealism, conviction and vision, alongside mercy and compassion and support for the weakest.

“Is that the image of the Church which we are presenting today, especially to our young people?” he questioned.

“Do we still come across as negative, a Church of a rule book on everything? Do we come across, on the other side, perhaps as a Church on the retreat; timid in presenting our vision for fear that we may be unpopular?”

“I believe that the Church has to learn again how to criticise. It is not easy. In the past the Church criticised as if it had answers to all sorts of social problems and demanded that society be conformed to a Church understanding of realities.”

But he said now the Church has to learn to form its criticism in language which is open to dialogue with the language of the men and women and young people of our time and to convince them rather than condemn them.