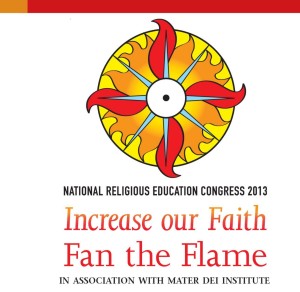 Religious education is not an “anything goes” discipline and yet it must always be open to dialogue, Archbishop Diarmuid Martin of Dublin told delegates at the National Religious Education Congress in Dublin on Saturday.

Addressing the issue of adult faith formation, the Archbishop underlined that religious education is a life long project.

Discussing some of the themes raised by Pope Francis in the first six months of his pontificate, Archbishop Martin said Christians and the Church have to learn a new language of evangelisation, “a language which is not hostile to the world but fosters engagement within a pluralist society.”

He warned that a half-hearted believer will easily cave in to an easy relativism and effectively witnesses to nothing.

“Our faith is not the faith of the comfortable sitting room, from which we can contentedly sit back and comment on the world from a safe distance. The Christian message is spread not just by nice words, but a life which is marked by radical integrity of life in line with the Gospel,” he commented.

Speaking in Mater Dei in Dublin, Archbishop Martin cited Pope Francis’ view expressed in a recent interview in which the Pontiff said “If a Christian is a restorationist, a legalist, if he wants everything clear and safe, then he will find nothing.”

The Pope also warned that tradition and memory of the past must help us to have the courage to open up new areas to God.

“Those who today always look for disciplinarian solutions, those who long for an exaggerated doctrinal ‘security,’ those who stubbornly try to recover a past that no longer exists­—they have a static and inward-directed view of things. In this way, faith becomes an ideology among other ideologies.”

The Archbishop asked the congress participants if religious education led to courage and audacity?  “Do we transmit enough about the freedom which belief brings? Are we still trapped in our own establishments? Are we caught up in a search for security and status in society?,” he asked.

He also noted that what the Pope was saying was that lack of status and power and apparent certainty is not necessarily a threat to the Church: it can be a clear indication of the Church’s priority commitment to serve the Lord.

Of the Year of Faith, Archbishop Martin said that it had reinforced for him the conviction that there are so many believers who are hungry for a formation in faith and a dialogue about their faith in today’s world.

He said the Year of Faith had actually been a surprisingly successful event in the life of the Church. “There is a natural tiredness about successive and even overlapping ‘years’.  It has been very interesting for me to note, at least here in the Archdiocese of Dublin, but I am sure the same is true elsewhere, the striking number of initiatives that have been taking place, especially at parish level for the Year of Faith.”

This brought home to me just how much interest there is among adult Christians in Ireland for renewed formation in the faith. The experience of the Year of Faith has reinforced that conviction, he said.

Archbishop Martin was critical of the implementation of Share the Good News which had not been “as forceful as is needed.”

He acknowledged that it is hard to move out beyond the traditional patterns. “We can all be caught up in our personal sector and just give token recognition to the bigger picture,” he noted.

He said religious education still remained very much a school exercise and the links between family, parish and school had not been developed sufficiently, especially in areas where there is great human mobility and parish and school and community are not contiguous.

He added, “Today we have a heightened awareness that the religious education that is received in school will – no matter what its quality – never be sufficient for an adult to live his or her faith fully in the complex world in which we live today.”

Congratulating the organisers on their choice of theme for this year’s congress – ‘Increase Our Faith: Fan the Flame’ – the Archbishop said it was appropriate as the Year of Faith drew to a close.

Adult faith formation is not just about organising courses. It is a dialogue between faith and the realities of the world which responds to the real challenges of modern life in Ireland and helps the Christian to live the realities of his or her faith in a mature way in a changing society and to impact society through the contribution of faith, the Archbishop suggested.

“I feel that it is still very difficult for many of us to comprehend fully the change that Pope Francis is advocating in the life of the Church,” he said before he referred to the Pope’s comments on rigorism and laxism.

“If it is not black then it must be white. If it is not rigorist it must be lax. The Pope says, to take one example, that we cannot insist only on issues related to abortion, gay marriage and the use of contraceptive methods. This is not possible. I have not spoken much about these things, and I was reprimanded for that.”

Commenting on the reaction to the comments, he said, on the one hand some say that the Pope was misquoted, he obviously did really not mean what he said.

Others say that if the Pope says “we cannot insist only on such themes”, then that means that we need never talk about them at all.  Our rigorism leaves us in a situation in which we can only cope with black or with white and we find it hard to understand what the Pope is saying.

Pope Francis wants us to move from a rigorist religious culture to one in which the mercy of God become the dominant theme, but which does not mean that we revert into laxism. Our black and white rigorist culture makes it hard for us to do that, Archbishop Martin suggested.