Relief and joy as abortion proposal defeated in NI

Members of the Stormont Legislative Assembly voted by 59 to 40 late Wednesday night to defeat a proposal to allow abortion in the case of fatal foetal abnormalities and rape.

The proposals in relation to abortion for life limiting conditions were  brought by Alliance Party MLAs Stewart Dickson and Trevor Lunn, while Anna Lo of the Alliance Party proposed allowing abortion in cases of rape / incest.

The debate on the issues went on till almost midnight.

Ms Lo’s proposed amendment on rape and incest was defeated by 64 votes to 30.

Democratic Unionists and SDLP members voted against the proposals. Sinn Féin said its MLAs supported a relaxation of the laws on abortion.

The Democratic Unionist Party (DUP) has now requested that Health Minister Simon Hamilton establish a working group, with the involvement of clinicians, legal professionals, and mothers and fathers whose unborn babies were diagnosed with life-limiting conditions, to allow proper consideration of the matter by the Executive and the Assembly.

“In the face of such ferocious pressure to legalise the killing of unborn children, they had the wisdom, the courage, and true compassion to see that abortion is not the answer,” said Bernadette Smyth.

Evangelical Alliance also welcomed the result of the vote.

“The law as it stands strikes a delicate balance between the life and health of both the woman and her unborn child.”

The proposed amendments to the Justice (No 2) Bill would have allowed “the decision to abort to be based solely upon the child’s medical condition or the circumstances of their conception,” it said in a statement.

“Women deserve better than abortion. We believe that the current law on abortion, when supported by guidelines and underpinned with services, is best care for women.” 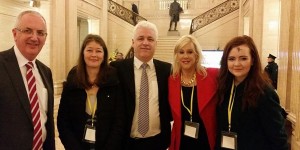 Precious Life thanked those who lobbied their MLAs in advance of the vote and attended the Vigil for Life outside Stormont on Tuesday evening.

“Last night’s results make clear that a vote for Sinn Fein, the Alliance Party or the Green Party in the upcoming election is a vote for the killing of unborn children,” said Bernadette Smyth adding that Precious Life would ensure the protection of life  was an election issue.

She said Precious Life looked forward to contributing to discussions in the working group on better provision of perinatal hospice care “in every hospital throughout Northern Ireland”.

Dawn McAvoy from Evangelical Alliance said the Assembly’s vote was in line with “expert medical advice, the best legal advice and the views of the majority of respondents to the Department of Justice consultation.”

The proposals would have led to a considerable legal, medical and ethical shift, she added.