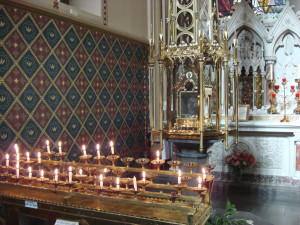 For the third year, the relics of St Oliver Plunkett are to return to the Kilmore Diocesan Pastoral Centre in Co Cavan next week.

On Tuesday 7 June, the relics will arrive at the centre at 10am and will be available for veneration until 10pm that evening.

A lunch-time Mass will be held in the Chapel at 1:15pm offered by Fr Kevin Fay, chaplain to Loreto and St Patrick’s Colleges in Cavan, for those doing examinations.

Fr Gabriel Kelly, parish priest of Kinawley-Killesher and a former student of the Pontifical Irish College in Rome where St Oliver also studied, will celebrate Mass at 5:45pm and deliver the homily.

Mgr Liam Kelly, parish priest of Kilsherdany and Drung and Vicar General of the Diocese of Kilmore, will be the principal celebrant and homilist at the 8pm Mass. The music for this Mass will be provided by the Belturbet Church Choir.

The event has been organised by the Kilmore Diocesan Pastoral Centre with the assistance of the Knights of Saint Columbanus.

St Oliver Plunkett was born at Loughcrew, near Oldcastle in Co Meath on 1 November 1625.

Having studied at the Irish College in Rome, he was ordained a priest in 1654 and became Archbishop of Armagh and Primate of All Ireland in 1657.

He maintained his duties in Ireland in the face of English persecution, reorganising the ravaged Irish Church, but was eventually arrested and tried for treason in London.

Having being found guilty of high treason on perjured evidence, he was hanged, drawn and quartered at Tyburn on 1 July 1681, and became the last Roman Catholic martyr to die in England.

Before being hanged, drawn and quartered in London, Oliver Plunkett delivered a speech from the scaffold, forgiving all those responsible for his execution.

Oliver Plunkett was beatified in 1920 and canonised in 1975 by Pope Blessed Paul VI, the first new Irish saint for almost seven hundred years.

His head was delivered to the community of Dominican nuns at the Siena convent in Drogheda from Rome in 1725.

At the time, the convent’s superior was Sr Catherine Plunkett, who was believed to be his grand-niece.

The Saint’s preserved head was installed in a side altar at the newly-built St Peter’s Church in 1921 and later moved to its own shrine in 1995, where it remains in the Co Louth town.

The door of the cell where Oliver Plunkett was imprisoned before his execution is also preserved in the Church.

The relic of Saint Oliver Plunkett has been visited by many famous people over the years including the late Pope St John Paul II.