Relics of St Anthony to visit Ireland and the UK 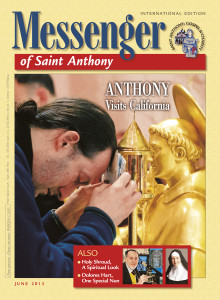 The relics St Anthony of Padua, one of the Church’s most popular saints, are to visit six venues in Ireland this October.

Confirming the good news, Padua-based Franciscan Conventual friar, Fr Mario Conte, announced on Tuesday that the relic tour would take in Dublin, Wexford, Cork, Limerick, Galway and Belfast in Ireland between 17 and 24 October.

Fr Conte, who is editor of the popular magazine, The Messenger of St Anthony, which has a circulation of over 10,000 in Ireland, will accompany the two relics – a small piece of petrified flesh and layers of cheek skin of the Saint on their journey around Ireland and the UK.

A number of Irish bishops have already signalled that they will participate in hosting ceremonies relating to the relics.

Their arrival in Dublin on 17 October at the parish of the Franciscan Conventual friars in Fairview in Dublin, will see the papal nuncio, Archbishop Charles Brown and the Archbishop Diarmuid Martin of Dublin lead a ceremony of welcome and Mass.

Elsewhere, Bishops Denis Brennan, John Buckley, Brendan Leahy and Martin Drennan have confirmed that they will participate in ceremonies in their dioceses.

Though he died as long ago as 1231, St Anthony’s popularity has rarely waned over the centuries. He is widely revered as the Saint who helps people find lost things or people.

This relic tour is taking place to mark the 750th anniversary of the discovery of St Anthony’s incorrupt tongue by St Bonaventure.

Speaking from Italy, Fr Conte OFM conv, told CatholicIreland.net that the visit of the relics “is like the visit of a friend who has come to see people whom he holds dear, whom he has not forgotten.”

He added, “There is nothing superstitious about relics. The real meaning of a relic is love – they are a link of love between the person who venerates and the saint.”

Referring to Pope Emeritus, Benedict XVI’s address at World Youth Day in Cologne in 2005, he said that by inviting us to venerate the mortal remains of the Saints, the Church does not forget that, in the end, these are just human remains, but they are remains that belonged to individuals touched by the living power of God.

The Italian friar described St Anthony as “a messenger of hope” who reminds us all that “God really cares for us and is closer to us than we think.”

This is not the first time the relics of St Anthony have visited Ireland; the last time they visited was in 2003.

The Franciscan Conventual friars have two friaries in Ireland, one in Fairview in Dublin and one in Wexford. The first members of the order came to Ireland in 1230 and settled in Wexford.

Irish members recently celebrated the final profession of Friar Rory Doyle from Wexford, the first Conventual Franciscan to profess vows in Wexford Town in over 527 years.