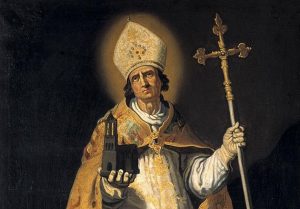 A relic of the Patron Saint of Luxembourg is to be given a new permanent home in Carlow Cathedral later this year.

St Willibrord studied and was ordained in Carlow in the 7th century, and this year for the first time a delegation from the county will go on a pilgrimage to his basilica in Echternach, Luxembourg.

Carlow County Museum will host an exhibition to the saint, and a group from Echternach will present a relic in the form of a piece of bone to the Carlow pilgrims.

St Willibrord is one of the most important saints in Europe and he has appeal across many Christian communities, particularly for Catholics, Anglicans and Old Catholics. Through the mists of time, his Carlow connection would for the most part have been forgotten, but academic research over the past 30 years has re-established the connection. In 2009 President Mary McAleese visited the town of Echternach as part of her state visit to Luxembourg and spoke of the connection.

Born in Northumbria in AD 658, the saint spent the years between the ages of 20 and 32 in the Abbey of Rath Melsigi in Carlow, which was a centre of European learning in the 7th century. He became the first Bishop of Utrecht and died at Echternach, Luxembourg in AD 739. He is buried in Echternach, and is the only saint buried in Luxembourg. His feast day is 7 November.

Speaking this week, Dermot Mulligan, curator of the museum, said that the relic would be kept in Carlow Cathedral after first spending time in St Laserian’s Cathedral. Indeed, next summer will see a major celebration of St Willibrord’s life in Co. Carlow. From Sunday 4 June to Wednesday 7 June, Bishop Denis Nulty, Bishop of Kildare & Leighlin, and Bishop Michael Burrows, the Church of Ireland Bishop of Cashel, Waterford, Lismore, Ferns, Ossory and Leighlin, will lead a historic joint diocesan pilgrimage from Co. Carlow to Echternach.

On the Tuesday after Pentecost Sunday (Tuesday 6 June), there will be the UNESCO World Heritage Status annual ‘hopping procession’ in his honour in Echternach. This procession sees upwards of 30,000 people descend on the town to honour their patron saint. The joint diocesan pilgrimage from Carlow will be under way at that time.

In late June a group of 30 will travel from Echternach to Carlow. You can join them on Saturday 24 June and ‘Walk with Willibrord’ as the relic is carried in a public procession along the Barrow Way from St Laserian’s Cathedral, Old Leighlin to the Cathedral of the Assumption, Carlow, where it will be permanently housed.