Refuse to settle for mediocrity Pope urges in Lenten message 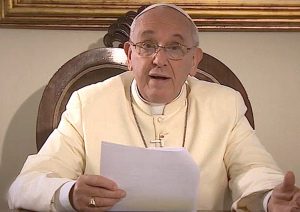 Pope Francis issued his 2017 Lenten message on Tuesday with an exhortation to the faithful not to settle for mediocrity but rather to strive to grow in friendship with the Lord.

Describing Lent as “a new beginning, a path leading to the certain goal of Easter, Christ’s victory over death”, the Pope said the season urgently calls people to conversion.

“Christians are asked to return to God ‘with all their hearts’. Even when we sin, he patiently awaits our return; by that patient expectation, he shows us his readiness to forgive.”

The message, dated 18 October but released on 7 February, is entitled ‘The Word is a gift. Other persons are a gift.’

The message has three sections which are titled: the other person is a gift; sin blinds us and the Word is a gift.

In his message, Pope Francis reflects on the parable of the rich man and Lazarus from Luke’s Gospel and Francis asks the faithful to find inspiration “in this meaningful story, for it provides a key to understanding what we need to do in order to attain true happiness and eternal life.”

He also notes that Lent is a favourable season for deepening spiritual life through fasting, prayer and almsgiving.

Reflecting on the parable, he says the poor man is called Lazarus, which literally means ‘God helps’.

“Lazarus teaches us that other persons are a gift. A right relationship with people consists in gratefully recognising their value. Even the poor person at the door of the rich is not a nuisance, but a summons to conversion and to change.”

The Pope emphasises that the parable first invites people to open the doors of their heart to others because each person is a gift, whether it be our neighbour or an anonymous pauper.

“Lent is a favourable season for opening the doors to all those in need and recognising in them the face of Christ. Each of us meets people like this every day.

“Each life that we encounter is a gift deserving acceptance, respect and love. The word of God helps us to open our eyes to welcome and love life, especially when it is weak and vulnerable. But in order to do this, we have to take seriously what the Gospel tells us about the rich man.”

Elsewhere in his Lenten message, Pope Francis notes that the Apostle Paul teaches that “the love of money is the root of all evils” (1 Tim 6:10).

“It is the main cause of corruption and a source of envy, strife and suspicion. Money can come to dominate us, even to the point of becoming a tyrannical idol (cf. Evangelii Gaudium, 55). Instead of being an instrument at our service for doing good and showing solidarity towards others, money can chain us and the entire world to a selfish logic that leaves no room for love and hinders peace.

“The parable shows that the rich man’s greed makes him vain. His personality finds expression in appearances, in showing others what he can do. But his appearance masks an interior emptiness. His life is a prisoner to outward appearances, to the most superficial and fleeting aspects of existence.”

The Pontiff warns that the lowest rung of this moral degradation is pride. “The rich man dresses like a king and acts like a god, forgetting that he is merely mortal.”

For those corrupted by love of riches, nothing exists beyond their own ego. Those around them do not come into their line of sight. The result of attachment to money is a sort of blindness. The rich man does not see the poor man who is starving, hurting, lying at his door.

“Looking at this character, we can understand why the Gospel so bluntly condemns the love of money: ‘No one can be the slave of two masters: he will either hate the first and love the second, or be attached to the first and despise the second. You cannot be the slave both of God and of money’ (Mt 6:24).”