Home > Featured > Refugees are “a blessing to our way of life”: Archbishop Welby

Refugees are “a blessing to our way of life”: Archbishop Welby 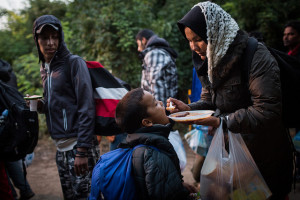 World Day of Migrants and Refugees is marked this weekend on Sunday 15 January 2017.

Both Pope Francis and the Archbishop of Canterbury, as well as church leaders in Ireland, have appealed for solidarity with migrants and refugees, while the Council for Immigrants of the Irish Bishops’ Conference has released a parish resource pack to tie in with the themes raised by this day.

In his message, the Pope has focused on ‘Child Migrants, the Vulnerable and the Voiceless’.

He said he felt “compelled” to draw attention to the reality of child migrants, especially the ones who are alone.

“In doing so I ask everyone to take care of the young, who in a threefold way are defenceless: they are children, they are foreigners, and they have no means to protect themselves. I ask everyone to help those who, for various reasons, are forced to live far from their homeland and are separated from their families.”

Emphasising how migration today is not a phenomenon limited to some areas of the planet, the Pontiff underlined that it now affects all continents and is growing into “a tragic situation of global proportions”.

“Not only does this concern those looking for dignified work or better living conditions, but also men and women, the elderly and children, who are forced to leave their homes in the hope of finding safety, peace and security,” he said.

And he warned that children are the first among those to pay the heavy toll of emigration, almost always caused by violence, poverty, and environmental conditions, as well as the negative aspects of globalisation.

“The unrestrained competition for quick and easy profit brings with it the cultivation of perverse scourges such as child trafficking, the exploitation and abuse of minors and, generally, the depriving of rights intrinsic to childhood as sanctioned by the International Convention on the Rights of the Child.”

The Pontiff also asserted that childhood has unique and inalienable needs.

“Above all else, there is the right to a healthy and secure family environment, where a child can grow under the guidance and example of a father and a mother; then there is the right and duty to receive adequate education, primarily in the family and also in the school, where children can grow as persons and agents of their own future and the future of their respective countries. Indeed, in many areas of the world, reading, writing and the most basic arithmetic is still the privilege of only a few. All children, furthermore, have the right to recreation; in a word, they have the right to be children.”

In his message for the new year, the head of the Church of England, Archbishop Justin Welby, spoke of refugees as “a blessing to our way of life”.

“Living well together despite our differences, offering hospitality to the stranger and those in exile, with unshakable hope for the future – these are the gifts, the commands and the promises of Jesus Christ,” he added.

In Ireland, the Council for Immigrants of the Irish Bishops’ Conference has released a parish resource pack for World Day for Migrants and Refugees. The pack contains the following resources to be used on Sunday and throughout the year:

– The Plight of Unaccompanied Refugees in Europe – Nasir’s Story

– Prayers of the Faithful

A selection of prayers for migrants and refugees and unaccompanied migrant children has also been made available.

Meanwhile, the Biblical Association for the Church of Ireland’s seventh Bible Study resource, God’s Heart for Migrants – Biblical Wisdom for a World in Turmoil, will be launched on 24 January by Archbishop Michael Jackson of Dublin and Glendalough.

The study has been produced for BACI by Dr David Shepherd of TCD (and formerly of Belfast Bible College) and involves five Bible studies focusing on migration.

The five studies are designed to aid reflection on the lessons offered today by the migration experiences of the Jewish people from Abram on to Canaan, Egypt and back, through the Exodus experience and the giving of the Law, to Ruth the Moabite and the challenges that faced her, and on again through the Babylonian exile to consider the perceived status of “pilgrims and sojourners here on earth” common to Jews and Gentiles alike in the early Church.

Copies of the study will be available from Christ Church and St Patrick’s Cathedrals in Dublin. Copies will also be available to download for free from the BACI website www.bibliahibernica.wordpress.com.