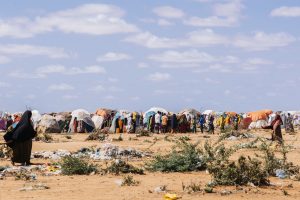 Visitors to the Ploughing Championships in Tullamore last week were given a glimpse of what it was like to be a prisoner of conscience in Latin America or a refugee in sub-Saharan Africa.

The Catholic overseas aid agency is a regular exhibitor at the Ploughing Championships, which are reckoned to be Ireland’s largest annual event, with more than 290,000 people visiting this year’s location in Co. Offally.

This year at the Trócaire stand, visitors could look inside a jail cell door to get a sense of the awful conditions endured by human rights defenders who are imprisoned for standing up for their rights and the rights of their communities.

“Human rights defenders” is a term used by the United Nations to describe people who, individually or with others, act to promote or protect human rights. Anyone can be a human rights defender by simply collecting evidence of human rights violations and raising awareness of those abuses, but frequently those who are activists are also students, journalists, lawyers, trade unionists, teachers, doctors or nurses.

“Last year was the deadliest year on record for human rights defenders across the world,” said Trócaire volunteer Simon McCormack, who was helping out in Tullamore. “Two hundred and seven activists were killed for attempting to protect their communities, their land and the environment from exploitation and abuse.”

Also on display at the Ploughing Championships was a tent similar to those used in Somalia by families fleeing war and drought.

Trócaire responds to humanitarian crises in countries where natural disaster or conflict has put people’s lives at risk. Last year over a million people were supported directly by Trócaire’s emergency programmes across Africa, Latin America, Asia and the Middle East.

Trócaire is currently running a campaign to allow people in Ireland to help human rights defenders across the globe by signing a petition on the charity’s website.