Reflect before you change marriage: bishops 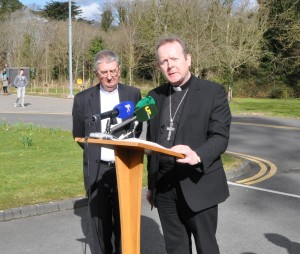 The bishops have reiterated their opposition to any “amendment to the Constitution which redefines marriage”.

In a statement on Tuesday, Archbishop Eamon Martin, president of the Irish Bishops Conference, said the forthcoming referendum was about amending the Constitution in a way which “effectively places the union of two men, or two women, on a par with the marriage relationship between a husband and wife which is open to the procreation of children”.

He said they could not support such a proposal.

The statement was issued during the IBC Spring general meeting in Maynooth. It highlighted that marriage is of fundamental importance for children, mothers and fathers, and society.

“All of us need to reflect deeply before changing it,” the bishops said.

They also appealed to the people of Ireland to consider very carefully the profound implications which this constitutional amendment would have on the family environment and the understanding of parenthood.

“We respect the views of people who think differently to us, trusting that our sincerely held views, grounded in faith, will also be heard and respected.”

Mothers and fathers bring different, yet complementary gifts and strengths into a child’s life, they said.

Meeting the media on Tuesday, Archbishop Eamon Martin and Archbishop Diarmuid Martin attempted to draw a line under the a row over “insensitive” remarks by Bishop Kevin Doran on gay parenting on Newstalk Breakfast on Monday.

Archbishop Martin of Armagh acknowledged that Bishop Doran had told him that he regretted any hurt his words may have caused anyone either by what he said or what they represented.

Dr Doran told Newstalk Breakfast that the Government was “trying to pull the wool over people’s eyes” by saying the marriage referendum isn’t about children. He said a redefinition of marriage is also a redefinition of parenthood.

Asked about gays and lesbians who are parenting children, the Bishop of Elphin responded, “But they are not parents. They may have children, but you see this is the point, people who have children are not necessarily parents.”

Questioned about this, Archbishop Diarmuid Martin described it as “an unfortunate phrase” and said he hoped “people were not offended by it.”

He added, “I believe certain types of language are inappropriate. We shouldn’t use phrases that offend.”

Bishop Doran also questioned in the interview whether people are born gay.

Archbishop Diarmuid Martin added, “The fundamental thing is that they are people – they are men and women with a unique dignity which can never be taken away from them.”

The two archbishops also expressed concern that if the marriage referendum is passed on 22 May that “it will become increasingly difficult to speak any longer in public about marriage as being between a man and a woman”.

They asked what the Church would be expected to teach children in school about marriage and they also questioned if people would be “forced to act against their conscience”.

Already, they warned, in the Children and Family Relationships Bill, it is proposed to remove mention of mothers and fathers from a whole raft of previous legislation.