Reek Sunday is “very much a family occasion” – Bishop Monahan 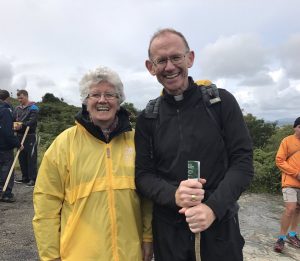 Many of those whom Bishop Fintan Monahan of Killaloe administered confession to on the summit of Croagh Patrick on Sunday were family groups of mothers, fathers and their children.

Speaking to Catholicireland.net, Bishop Monahan, who has just marked one year since his episcopal ordination, said Reek Sunday was “very much a family occasion”.

The former priest of the archdiocese of Tuam, who has climbed Croagh Patrick hundreds of times, highlighted that family was the special theme of the pilgrimage this year and Archbishop Michael Neary had made it his theme for his homily.

“We are just over a year from the big occasion of the 2018 World Meeting of Families. The message that he was trying to get across was we will have a time for preparing for that.”

But the Bishop of Killaloe also expressed concern over the pressures on families. “Families are under such pressure now; the traditional nuclear family as we know it has come under attack from all sorts of angles, not least the amount of busyness that people have and the difficulty people have to be together and to share meals together and to do basic things like days out.

“An occasion like this is very much a family occasion; it is free and you get so much – the beauty of creation and the beauty of nature and there is a spiritual input as well, whether it is doing penance for your sins or attending Mass or going to confession at the top.”

He spoke to the guardian of the Reek, John Cummins, who estimated that the numbers were up on last year, despite the matches in Croke Park involving Mayo, Galway and Roscommon.

“It is the same with the Camino, some will do it for religious reasons – others just to be out in nature, others will do it for the fun and the enjoyment and it is the same here. Every day of the year people are coming here and for a lot of them it is not for spiritual reasons.”

He also noted that in some way, climbing the Reek tapped into a male spirituality which parishes might not be tapping into.

But he acknowledged that women could also “get a huge amount out of it as well”.

Bishop Monahan climbs the Reek between nine and ten times a year for spiritual reasons as well as just for the enjoyment.

“When I was based in Tuam, it was only just an hour away. After work I would regularly do it and sometimes I would do it twice in the day; other times it was for very serious religious reasons – it might be the diocesan youth pilgrimage or a day like today or it might be individual parish groups.”

One of the pilgrims Catholicireland.net spoke to was 59-year-old Pat O’Donovan from Timoleague in West Cork who did the climb for the first time and lamented that friends who had done it previously had not told him how tough it would be. His wife had to bail out on the way up.

“This is the toughest thing I have ever done,” the farmer, who lives an active outdoors life, admitted.

“It is dangerous; part of the terrain is loose and it is steep. You need to be in good health to do it. Parents should think carefully before bringing their children,” he suggested.

A total of 13 people sustained injuries and were evacuated off the mountain. The most serious incidents involved a 70-year-old man who suffered a heart attack and was airlifted to Galway Hospital. Another man sustained serious upper body injuries, a dislocated shoulder and facial injuries. He was evacuated by the Air Corps to Mayo University Hospital. 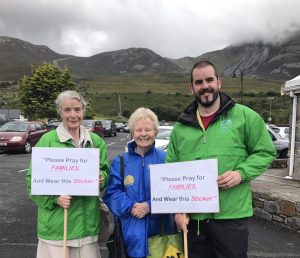 Matt Ward (24) from Luton in the UK did the climb in his bare feet. It was his fourth climb but his first without shoes. “Going up wasn’t so bad, but coming down took over two hours as there was a lot more pressure on the feet.”

He said that next year he would revert to climbing in trainers.

Richard Brennan, volunteer project manager for World Meeting of Families in 2018, was handing out information to pilgrims about the global church event which will see Pope Francis visit Ireland next year.

The 32-year-old arrived at 4.15am just before first light and found the car park almost full. “A few people with head torches were already on the way down when I arrived – it was fantastic to see.”

Though the weather was very changeable it didn’t put anybody off. “At times the weather was dire, but people still had plenty of smiles,” he said of the general good-natured atmosphere.

WMF2018 volunteers were asking people on their way up to pray for families as well as raising awareness around the event next year.

“The key point is to let them know that this is a global event for the Church; it is not just a Dublin event. We want people from all over the island of Ireland to take part, whether it is as a volunteer or as a pilgrim or in any capacity,” Richard Brennan explained.

Of the family involvement in Reek Sunday, he noted, “We have seen parents carrying children on their shoulders and small kids walking at a slow pace with their grandparents.

“It is a bit of a faith day out and that is why we are here asking people to pray for families because that is what the World Meeting of Families is all about.”

One of the families participating was Co. Fermanagh couple Paschal and Dympna Manley and their five children, who range in age from five to twelve, and who all did the climb. “There was definitely a faith dimension for us – we did the prayers on the way up,” Paschal explained.

Despite the physical demands, he added, “You feel very good after doing it. Climbing Croagh Patrick is also about health, and my children carrying the tradition on.”

For more information about volunteering at next year’s World Meeting of Families 2018 see: http://www.worldmeeting2018.ie/en/Get-Involved/Volunteer