Home > Featured > Reek Off! Stay away from Croagh Patrick next Sunday

Reek Off! Stay away from Croagh Patrick next Sunday

“Please stay away from Croagh Patrick this Reek Sunday” is the plea of the Tuam Archdiocese, An Garda Síochána and Mayo Mountain Rescue.

Last May, Archbishop Michael Neary announced the cancellation of this year’s National Pilgrimage to Croagh Patrick, which is due to take place next Sunday. Traditionally, the pilgrimage takes place on the last Sunday of July.

However, although the official pilgrimage has long been cancelled, there is still a sizeable number of people climbing the mountain every day. 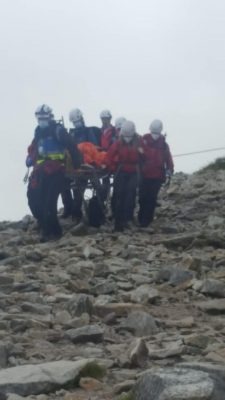 Last weekend, the municipal car park at Murrisk, at the bottom of the mountain, was packed to overflowing. An estimated 1,400 climbed the mountain last Saturday.

“There is no pilgrimage taking place this year,” said Fr Charlie McDonnell. “In the current circumstances the infrastructure available isn’t capable of coping with large numbers. The chapel on the mountain top has been closed all summer and the toilets on the mountainside are not being maintained. The pilgrimage is not happening based on public advice.

“We can’t stop people from climbing an open mountain – but we would ask them to consider that this is a locality where a lot of elderly, vulnerable people are living and they need to be protected and kept safe. Large numbers of people arriving is not beneficial.”

For mountain rescue personnel conditions at present are particularly arduous.

People suffering minor leg injuries due to a slip or a fall very often need to be stretchered off the mountain because of the rough ground conditions. At the best of times, carrying a stretchered incapacitated individual is hard physical work, but the task is made more demanding by the fact that the volunteer rescuers need to wear a face masks because of current public health precautions. On Monday, an injured man had to be carried off the mountain by rescuers.

While the municipal car park remains open, additional parking normally opened for Reek Sunday is not being made available this year. Additionally, Westport Gardaí are putting a traffic management plan into operation to prevent any mass gatherings on or near the 764m high Reek.