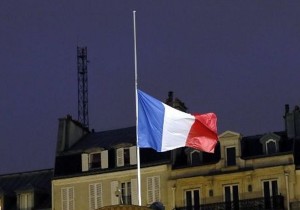 Bells rang out at midday in churches all over France yesterday to express the Church’s solidarity in the day of mourning for the victims of the shooting at the offices of Charlie Hebdo which left twelve dead.

In Rome, Pope Francis offered his morning  Mass at Santa Marta for the victims of the attack in Paris.

“Such terror is obviously unspeakable. Nothing can justify such violence. Moreover, it touches the freedom of expression, an essential element of our society,” said the bishops of France in a statement released on the day of the shootings (7 January).

This society, characterised by diversities of every sort, must work ceaselessly to build peace and fraternity, they said. “The horror expressed in this killing wounds us all.”

The bishops called for people to “redouble” efforts for peace and brotherhood in a “situation where anger can invade us.”

The attack is believed to be in retaliation to caricatures of the prophet Mohammad printed three years ago.

Pope Francis expressed his strongest “condemnation” of the horrific attack in a statement on Wednesday in which he said he was praying for the “suffering of the wounded and the families of the deceased”.

He called upon all people to “oppose by all means the spread of hatred and all forms of violence, both physical and moral, which destroy human life, violate the dignity of people, [and] radically undermines the fundamental good of peaceful coexistence between individuals and peoples, despite differences of nationality, religion and culture.”

The Pope described the terrorist act as “abhorrent” and said violence is never justifiable. He stressed that “any incitement to hatred should be refused.”

Cardinal André Vingt-Trois, archbishop of Paris encouraged people to work “more than ever to build relationships of peace and mutual respect in society.”

Two French Imams, Oubrou and Mossaoui spoke about the attacks to the French news outlets La Croix and I-Media. “Muslims are shocked and tired… the silent majority of them feel as if they are taken hostage,” said Imam Tareq Oubrou, director of the Mosque of Bordeaux.

Imam Mohammed Moussaoui, president of the Union of the French Mosque, said he was “frightened and shocked” by news of the attack, since he had just prayed with Pope Francis “for peace and brotherhood,” in the world with a special intention for Christians in the Middle East.

In a statement signed by Cardinal Tauran and the Islamic leaders, the Pontifical Council for Inter Religious Dialogue expressed its shock at the shootings and said it wanted to join with the words pronounced by Pope Francis denouncing this cruelty and blind violence.

“Like him we invite believers to show their human and spiritual solidarity with the victims and their families through their friendship and prayers.”

Religious leaders are called to always promote a “culture of peace and hope” they said, capable of overcoming fear and building bridges between people.

The statement went on “Considering the impact of the means of communication, we invite those responsible [for media outlets] to provide information respectful of religions, their followers and their practices, thus promoting a culture of encounter.”