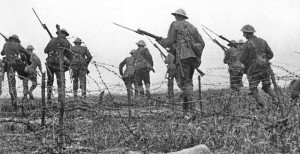 In 2016, the island of Ireland has an opportunity to create an Ireland for tomorrow and this is every bit as important as sorting out the past, the Church of Ireland Archbishop of Dublin has said.

In his sermon delivered at St Patrick’s Cathedral for the Second Sunday after Christmas, Archbishop Michael Jackson said, “It is not only that we need to make a real go of resolving our differences as we have inherited them and fed them historically, but we need to let those who are new citizens – immigrants and refugees, recent and of longer standing – to this bickering Ireland look critically at us and help us to become a rather different Ireland.”

Dr Jackson warned that the language of ‘the two communities’ and the language of ‘both sides’ is “literally incomprehensible to people who have not staggered through the minutiae of Irish history and traded prejudice and factual distortion as a definition of what matters most in civic and social life”.

He said they cannot understand the near-paralysis around historical legacy and the failure to move forward with some sort of togetherness.

Elsewhere in his sermon, Archbishop Jackson suggested that “2016 is a year in which we in Ireland, South and North, East and West, have the opportunity, once again, to grow into maturity and to express our maturity politically and socially for others.”

Referring to the two iconic historic events which have their centenary commemorations this year, the Easter Rising and the Battle of the Somme, he stated, “As subsequent history has dealt us its hand, these events which in so many ways have overlapped in their impact on Ireland much more than the self-styled purists and high priests of historical selectivity would like us to think, these two events have somehow helped to create the fault-lines which give us our fractured identities in Ireland, as Northerners and Southerners.”

“They have helped to cement not only political but psychological differences. They have been used to create ‘the two communities’.”

He said that these differences can perpetuate a paralysis in generosity in the inter-relations of both countries.

“Each ideology has become the enemy of the other and each seeks vigorously to deny this; and still the rapprochement is insufficient to convince an electorate on either side of the Border that there is a real hunger for pro-active peace-making and energetic community-building.”

The Archbishop of Dublin & Glendalough added that it is an electorate that is becoming more and more disillusioned about the priority of the public good in the minds of the professional politicians.

“As the danger in the Ireland of 2016 is that our shared confusion about the past becomes a dominant motif which overshadows the future, so we need to create spaces to hear the voices and to accept the gifts of humanity and of generosity of those who are new to our inherited preoccupations, those who today make their abode here.”

Reconciliation, Archbishop Jackson underlined, is needed country-wide if Irish society from this new year is to move beyond the economic model of recovery to a social model of development of people who, as individuals, together change community and expectation.

He also underlined that without the tireless work of Glencree and Corrymeela and countless other ‘Centres of hope in a time of distrust’ Ireland would be in a much worse place.

And for all of this local and international work we must indeed be thankful and grateful. Much remains to be done.

Referring to the mythical and romantic inspiration of a door preserved in St Patrick’s Cathedral known as the ‘Door of Reconciliation’ which is purported to be the origin of the phrase: ‘chancing your arm’, the Archbishop said that we have tended to move this phrase down a gear or two so that it means: pushing your luck.

He urged people to reclaim its primary meaning, which related to the closure of a feud in 1492 between two Irish families, the Butlers of Ormonde and the FitzGeralds of Kildare, where chancing your arm was an expression of trust more than it is an expression of opportunism.

“This primary meaning needs to be reclaimed in a context where mythology has all too often been dressed up as history. In the larger Christian tradition on this island we have been in A Year of Mercy since Advent Sunday 2015. Might we all make it our Resolution for 2016 North, South, East and West that we do a bit more of this chancing our arm?” the Archbishop suggested.