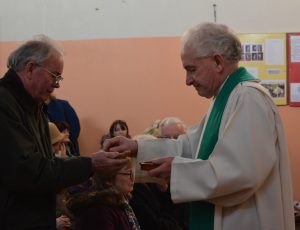 Censured Redemptorist priest, Fr Tony Flannery, has lamented the decline in standards of behaviour and codes of decency in the Dáil and public discourse.

Writing on his blog, http://www.tonyflannery.com/blog/ the Co. Galway-based priest decries the “very unkempt state of dress” of some TDs in the Dáil, arguing that it serves to coarsen the institution.

Elsewhere in his post, he warns that public discourse in Ireland has become “increasingly coarse” over recent years.

“This is very obviously so in our national parliament, so much so that a committee is now being brought together to see if there is any way of putting some rein on what is being said under privilege in the Dáil chamber and in the committee rooms.”

The 70-year-old priest, who is barred from celebrating Mass in public by the Vatican over his views on women priests and his questioning of some of the Church’s teachings on sexual morality, also hit out at a loss of certain codes of decency such as the recognition that there are things you should not say about another person who is not there to defend themselves.

This, he states, was once accepted by all members of the Dáil but is no longer recognised by some.

“As a result it is now common to have peoples’ names publicly slandered in parliament or in certain of the Dáil committees, where under present rules they have no way of getting redress.”

He stresses that what happens in parliament does affect the quality of life of the nation as a whole.

According to Fr Flannery, outside the Dáil, many public representatives speak and behave badly. “The Jobstown saga, both the event itself and aspects of the twelve-week trial, left a lot to be desired.”

He does not mince his words on the water charges campaign, commenting that at a time when climate change is the greatest challenge facing humanity, “the whole water charges debacle, which was used by many as a political football, with total disregard for the seriousness of the underlying issues, was particularly depressing”.

According to Fr Flannery, it is not just Irish politicians who are to blame, as the example from politicians both across the Irish Sea and the Atlantic are of no help.

Media, too, he warns, has become coarser. “We are familiar for many years with the coarseness of the tabloid press, but increasingly even the supposedly respectable news outlets are descending to the same level.”

Noting how cynicism is the half-sister of coarseness, he suggests it too is “rampant”.

The effect of this constant outpouring of cynicism is to spread the notion among the general populace that all public representatives are corrupt, and only interested in what they can get for themselves.

“This leads to a serious lessening of trust in the democratic process, which leads directly to the sort of chaotic situations we see in many countries today.”

Appealing to Christian values is no longer credible in Ireland.

The cleric suggests that maybe what is lacking is ordinary human decency, respect for each other, care for creation, working together as communities and as society for the good of all.