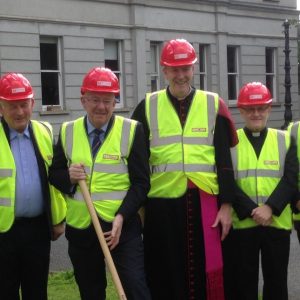 Work on a €10m renovation and extension of the fee-paying Knockbeg College in Co. Laois officially got under way this weekend when past pupil Charlie Flanagan, now a Fine Gael TD for Laois and Minister for Justice and Equality, turned the first sod at a ceremony at the site on Saturday.

Also present at the event was Bishop Denis Nulty of Kildare & Leighlin, who wore a red hard-hat of the occasion and who described the event as “an historic morning”.

Certainly, St Mary’s Knockbeg can claim to be a historic institution: it can trace its origins back to 1793, when it was established as a lay school for boys with an intake of 40 pupils.

While Coláiste Muire Cnoc Beag, as it is known in Irish, is located in Co. Laois, it lies just across the border from Carlow town, and so draws students from both Counties Laois and Carlow, plus students from nearby parts of Counties Kildare and Wicklow.

Today, despite the fact that the school’s permanent accommodation is designed for a maximum capacity of 280, the college has a student intake of 423 boys. For many years, the school has had to rely on temporary prefab buildings to provide much-needed classroom space, but this new development will greatly extend and modernise facilities.

Indeed, the Diocese of Kildare & Leighlin says the renovation will “bring Knockbeg into the 21st century”. Speaking to the Leinster Express newspaper in July, when building contracts were signed, college principal Mike Carew said that at the heart of the school complex was a house dating from the 1840s, which has been greatly extended but never modernised.

“Any past pupil would describe it as old and cold,” he said. “I have the utmost admiration for staff, some of whom have worked here for 30 years in cold, damp conditions. During the freezes of 2010 and 2011, some of the rooms were no warmer than 4 degrees. It has leaky windows and walls and no insulation. I am delighted we will be finally able to give the teachers and pupils the building they deserve.”

Minister Flanagan is said to have provided great support in securing the necessary Department of Education funding for the work to go ahead. In a Tweet, the Minister remarked that not only did the college provide a great education, it also produced great footballers. Among its alumni are the GAA players Chris Conway and Tommy Murphy, and former GAA Presidents Liam O’Neill and Hugh Byrne. Minister Flanagan is not the college’s only political ‘old boy’ either, as its past pupils include James Fintan Lalor, Kevin O’Higgins, William Hoey Kearney Redmond and Paddy Lalor.

The extension and renovation works are due to be completed by 2019.