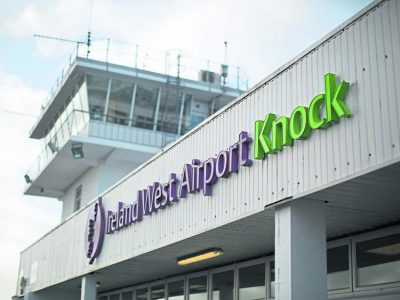 Last year was another record year for Knock Airport.

The previous record for passenger numbers at the airport, which was founded by Msgr James Horan, was 750,000.

Ireland West Airport Knock said its performance had been boosted by flights to and from the UK, with an extra 21,600 passengers flying on those routes in 2018.

2019 is forecast to be another year of growth at the airport, with Ryanair’s new service to Cologne in Germany launching in June, and the introduction of additional seats on the Ryanair Barcelona and Bristol services.

The airport is predicting passenger numbers will reach 800,000.

Ireland West Airport Knock reduced its losses by more than 40 per cent last year thanks to the record number of passengers.

Its turnover was €13.1 million, according to accounts for Connaught Airport Development Company Ltd.

Knock Airport was the brainchild of Msgr Horan who first lobbied the hierarchy to build a new basilica at Knock Shrine to prepare for the papal visit of 1979, which coincided with the centenary of the Knock apparitions.

The tourism generated by the papal visit to Knock sparked the idea of an airport and Msgr Horan set about lobbying across the religious and political establishment as well as among the Irish diaspora.

Construction of the airport was completed in 1986.

Sadly, Msgr Horan hardly had time to enjoy the fruits of his labour when tragedy struck. On a visit to Lourdes he collapsed and died, aged 75.

In 2013, the people of Knock erected a nine-foot statue in his honour to commemorate his work for the parish and the region.