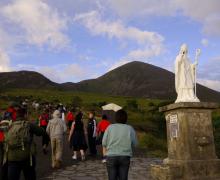 A special Pilgrim Prayer Card is being launched in Westport, Co Mayo today in time for the annual Reek Sunday pilgrimage, which is expected to see as many as 20,000 people climb Ireland’s holy mountain.

The prayer card is being launched by Archbishop Charles Brown, Apostolic Nuncio, and Archbishop Michael Neary of Tuam.

For 1,500 years, pilgrims have been following in the footsteps of St Patrick and many use the traditional Stations of the Reek along the route.

However, many are unaware what these stations are.  This year the stations have been produced on a new handy pocket-sized, weatherproof prayer card. The prayer card invites those undertaking the pilgrimage to pray at the following stages of the pilgrimage:

1 – At the foot of the mountain

2 – Along the path – a moment to catch your breath

The prayer card also includes the beautiful ‘The Deer’s Cry/Saint Patrick’s Breastplate’ and a welcome message to pilgrims. It is waterproof and folds to pocket size.

“Let God be your guide. Let Him reveal to you the sacredness of your own life’s path… Let Him bless you as you set out, lead you forward in confidence, and accompany your every step of the way… Remember, you’re in good company; Moses, Jesus, Patrick. Climb it mindfully. Encounter God…”

They will be joined by Bishop Brendan Kelly, Bishop of Achonry, who is completing the Reek Sunday pilgrimage as part of a personal Year of Faith journey of various pilgrimage sites. The Bishops will begin their climb on Sunday at 7.00am.

On Saturday evening at 6.30pm Archbishop Brown will be the principal celebrant at the vigil Mass in St Mary’s Church, Westport to mark the beginning of the pilgrimage. Archbishop Neary will preside and will preach the homily.

As part of the Year of Faith and The Gathering, those who register to climb during Reek Week can avail of a specially commissioned Certificate of Completion, which is co-signed by the Archbishop of Tuam, Dr Michael Neary, and the Cathaoirleach of Mayo County Council, John O’Malley.

The certificate will be marked with the official seal of Croagh Patrick. Another first relates to the placing of a sign at the top of Croagh Patrick to mark out the summit and this is intended to facilitate photos. The sign includes the Reek Week logo, incorporating logos of both the Gathering and the Year of Faith.

Croagh Patrick is a physically demanding pilgrimage. All those who intend to make the pilgrimage climb are asked to come prepared for the changeable weather conditions, to bring suitable clothing and footwear, water, a walking stick/staff and to be mindful at all times of their own safety and the safety of other pilgrims.

On Sunday, Mass will be celebrated on the summit of Croagh Patrick every half hour beginning at 8am, with the final Mass commencing at 2pm.

–          The 9.30am Mass will be celebrated by Archbishop Charles J Brown, Apostolic Nuncio to Ireland

Pilgrims can avail of the Sacrament of Reconciliation on the summit from 7.30am to 2pm

Ireland’s holy mountain is climbed by over 100,000 visitors annually and dominates the landscape of southwest Mayo both spiritually and physically.

Croagh Patrick (c.2,510ft/765m) is where St Patrick, in 441, spent forty days and nights fasting on the summit, following the example of Christ and Moses.

In 2006, Archbishop Neary and other pilgrims were accompanied by Cardinal Seán Brady, Primate of All Ireland and successor to St Patrick, in their Reek Sunday pilgrimage.

Cardinal Brady was the first Archbishop of Armagh to climb the Holy Mountain since St Patrick.

In 2005, Archbishop Neary unveiled a plaque to mark the centenary of St Patrick’s Oratory on the summit.

St Patrick’s Oratory – the church on the summit of Croagh Patrick – is open daily during July and August and gives pilgrims the opportunity to come in, say a prayer and light a candle, at what for many people is the goal of their journey. 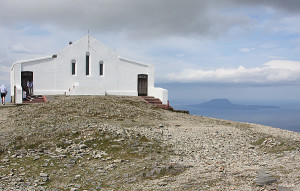 Further information on Croagh Patrick, on the website of the Archdiocese of Tuam www.tuamarchdiocese.org.  Also see: www.westportparish.ie Pilgrim Prayer Card and Stations of the Reek Booklet can be viewed on www.catholicbishops.ie.