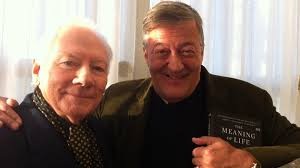 A prominent catholic commentator and Dominican priest has said he doesn’t find actor Stephen Fry’s rant against God offensive but has described it as “naively arrogant”.

Editor of Alive newspaper, Fr Brian McKevitt, responded to CatholicIreland.net that Fry was an atheist and “that’s the way atheists think”.

In this evening’s ‘Meaning of Life’ programme which will be broadcast on RTE 1, Gay Byrne asks the actor, “What if you’re wrong, and when you die, you find yourself at heaven’s gates?”

In a response which clearly shocked Gay Byrne, Fry says he would tell off the Almighty.

“How dare you create a world in which there is such misery that is not our fault – it is not right. It is utterly evil. Why should I respect a capricious mean-minded stupid God who creates a world which is so full of injustice and pain?”

Fry also rails against a God that presents himself as all seeing, all wise, all kind and all beneficent but says he is “quite clearly an utter manic” and “totally selfish” as believers are expected to spend their life on our knees thanking him.

“What kind of God would do that?” he asks.

Referring to bone cancer in children and insects which target children’s eyesight, the 57-year-old who has long suffered from bipolar depression, hits out at a God capable of creating such a world as “utterly monstrous”.

He claims that the moment you banish God, life becomes simpler, purer and cleaner – and more worth living”.

On his twitter blog on Friday, Fry admitted to having given God “quite a kicking”.

Responding, Fr McKevitt said, “Unfortunately neither Gay Byrne nor his colleagues in RTE have the ability to tackle such topics, to challenge codology, so people like Mr Fry always get a predictably easy run from them.”

He said the mystery of a good, all-powerful God and a world in which suffering is so great has been around for thousands of years, “yet Mr Fry approaches the mystery as if he was the first to discover it, unaware of previous attempts to grapple with it”.

Fr McKevitt added, “While his ability to ‘outrage’ at suffering is very impressive, his response to it is incredibly naïve and simplistic – simply deny the existence of God”.

“But what does that achieve? It solves nothing. It certainly doesn’t remove the problem of suffering or explain where it comes from.”

“On the contrary, denying the existence of God goes against reason and leads to a huge host of new problems. Above all, whether human life has any real value or purpose in the long run.”

According to the Dominican friar, the other possibility is to concoct a God who would fit into Mr Fry’s “little mind and would meet with his approval – a God made in the image of Fry. But such a God wouldn’t even satisfy Mr Fry himself!” he said.

He added, “History shows that it is precisely the people who believe in a good God, who took Christ at his word, who have devoted their lives to caring for the sick and the poor. Indeed, only they can explain why the elderly, the sick and the poor are worth caring about.”

He added, “Being able to ‘outrage’ about God, however, tends to serve a very different agenda today. It saves atheists having to give an account of their own understanding of life, its origin, its purpose, to account for human freedom.”

Another theologian and former lecturer in Maynooth, Fr Martin Henry, said “I think the crux of the matter really lies in what you do when you abolish God or any ultimate sense of goodness, in reaction to, or as a consequence of, contemplating the terrors of existence — what are you then left with?”

He continued, “In the name of what or whom do you protest against suffering and evil, if there is nothing to define it by or against.”

He said the ‘answer’ lies in a different world to the world in which the questions are posed, and he quoted Les Murray’s poem, The Knockdown Question.

Why does God not spare the innocent?
The answer to that is not in
the same world as the question
so you would shrink from me
in terror if I could answer it

Roger Childs, Senior Production Executive & Genre Head of Religious Programmes told CatholicIreland.net, “Our audience is free to make of these views what they will. We are not endorsing anyone’s faith or lack of it and strongly hope that our programme is not the last word in any conversation, but kick-starts debate that continues after the credits.”

He said Friday’s Twitter activity would tend to support that view.

“Stephen Fry’s opinions have so far only been seen in out-of-context promotional clips on YouTube. In the programme, he contextualises and explains his deeply-held moral and religious positions. He also makes clear that he has no intention of criticising the sincere faith of any individual, as long as it doesn’t impinge on his own liberty an identity.”