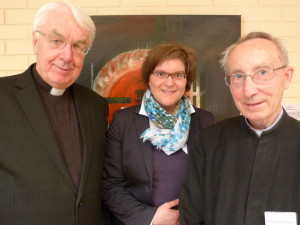 The annual gathering of the Ratzinger Schülerkreis opens in Castel Gandolfo this week but without Pope emeritus Benedict XVI for the first time since it was inaugurated in 1978.

The Ratzinger Schülerkreis is made up of Benedict XVI’s students from his time as a professor of theology at the University of Regensburg.

It is formed from about 50 people who studied for doctorates or did post doctoral research under the then Professor Ratzinger. Usually between 25 and 30 of these attend any given year’s meeting of Ratzinger Student Circle.

This year’s meeting begins on 29 August and will discuss “the question of God against the background of secularisation.” The guest speaker is the French academic Rémi Brague. Last year’s meeting discussed ecumenism.

Among the participants will be professor emeritus of moral theology at Maynooth, Fr Vincent Twomey, SVD.

According to another member of the Schülerkreis, Fr Joseph Fessio of Ignatius Press, the participants will attend a Mass celebrated by Benedict XVI at the monastery of Mater Ecclesiae in the Vatican at the conclusion of the seminar on 2 September.

Fr Stephen Otto Horn, SDS, who is president of the Ratzinger Schülerkreis or Ratzinger Student Circle told CatholicIreland.net in June that the subject was chosen by the retired pontiff.

Fr Horn, who acted as an academic assistant to Joseph Ratzinger from 1971 to 1977 at the University of Regensburg while he undertook post doctoral research under the future Pope’s supervision, said that in May Benedict was frailer but still “very fresh”.

Fr Horn met the Pope emeritus for an hour to discuss this year’s seminar.

Although Benedict XVI confirmed to Fr Horn that he would not attend the meeting of his former students and the young theologians of the Junior Ratzinger Schülerkreis, he nevertheless gave careful time and consideration to the choice of speaker.

“When I was with him, I asked him if it would be possible for him to attend, perhaps even for part of it. But he said he will stay at his convent and will not go to Castel Gondolfo,” Fr Horn explained.

Asked about the absence of Joseph Ratzinger from this year’s Schülerkreis, Fr Twomey told CatholicIreland.net, “We are all getting old, so it can’t continue. We’ll go this year primarily out of homage to Benedict,” the 72-year-old said.