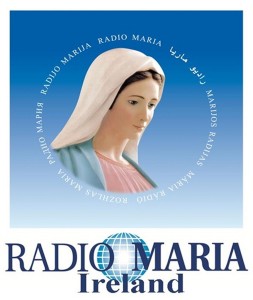 Radio Maria Ireland, which is part of the 70 plus Radio Maria stations all over the world, began broadcasting on 13 May 2015, the feast of Our Lady of Fatima.

Currently it broadcasts five hours a day from 8.50am until around 2pm and has nine staff members and a number of volunteers.

The  public can tune into the pilot broadcasts at www.radiomaria.ie.

Its facebook page (Radio Maria Ireland) gives a daily account of what is happening and people who will be interviewed and reactions.

There is also a Radio Maria app allowing people to tune in to the station on their smart phones.

The Irish operation got up and running through donations from World Family of Radio Maria in particular Radio Maria Germany but Station Co-ordinator Aoife Martin says that going forward they will be “relying on providence and the generosity of  listeners in Ireland”.

The station is located near the Red Cow roundabout near Dublin’s M50 at St Anthony’s Business Park, Ballymount Road.

Unusually for a business set in an industrial estate, on site there is a chapel from which daily mass is broadcast every day at 10am.

The Radio Maria franchise calls for a third of programming time to be for prayer (Morning Prayer, Divine Office, Mass, Rosary), a third for formation and study of the Catholic Catechism and the rest of the time for “social issues, testimonies and the like”.

It also insists on a priest being at the helm.

Filling this role is popular Salesian priest Fr Michael Ross who currently says the daily mass and gives much of the catechesis.

Ms Martin said the station is looking for other volunteer presenters, religious or lay, with expertise or experience in particular areas of Catholic faith.

The natural market for the station is older people, but according to Aoife Martin, it is also meeting a need in younger people for Christian formation.

“I am a young person. I was what you might call a ‘Canteen Catholic’ picking what I wanted and ignoring the rest,” she told CatholicIreland.net.

She didn’t feel fulfilled and gradually came back to the practice of her faith but realised that she did not know it.

“I firmly believe that the catechism was missed in my education and indeed in the education of the current generation and all the younger children. I grew up not really knowing what I believed in. It is a real problem in Ireland and one of the things we hope to address.”

Since they started the pilot broadcasts, merely promoting the station in a “soft way” through social media, Radio Maria has doubled its number of Facebook followers to almost 1,400 people.

The schedule is still being worked on but each day begins with prayer and Mass at 10am followed by study of the catechism. This 30-minute slot will be extended to one hour next week.

Six weeks ago Radio Maria Ireland applied for a DAB (digital broadcast licence) which the station hopes to obtain by October.

This would allow them to broadcast on cable or satellite and digital radio in Dublin and Cork.

“Once we get a digital radio licence, we can send out a small device to people who are housebound or in prison, so they can tune into it,” said Ms Martin.

Radio Maria began in Italy over 25 years ago as a parish radio. With the support of a Catholic businessman, within three years the station was broadcasting all over Italy.

The station is hoping to have its Digital Broadcast Licence by the autumn at which point it will be officially launched.