Queen awards MBE to Loreto nun for her anti-trafficking work 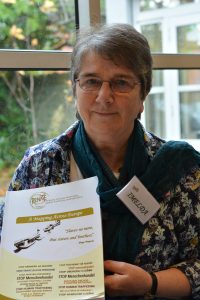 Congratulations have been pouring in for a Loreto Sister who was made a Member of the Order of the British Empire by Queen Elizabeth in her Birthday Honours list in recognition of the nun’s efforts to end modern slavery.

The honour for Sr Imelda Poole IBVM was hailed by Cardinal Vincent Nichols, head of the Church in England and Wales, as well as the British Ambassador to the Holy See, Sally Axworthy.

The Cardinal tweeted on Saturday that Sr Imelda and her many colleagues in other religious congregations have long been champions in this important work.

“Her hard work, determination and her compelling advocacy constantly bring support and encouragement to all involved in this struggle, myself included,” he said.

She added, “Sr Imelda is a key ally in Her Majesty’s Government’s campaign to eradicate modern slavery. It is wonderful to see such a distinguished friend of this Embassy honoured in this way.”

Sr Imelda Poole IBVM is a member of the English province of the Loreto Sisters. She has been on mission in Albania for almost thirteen years.

The Archbishop in Tirana asked the Loreto Sisters to work in the field of anti-trafficking in his diocese.

In an interview with the Catholic Times in 2016, she explained that she is “a Birmingham girl.” She first arrived in Albania in 2005 in response to Loreto in Britain’s decision to start a new foundation at the margins, beyond the boundaries of where their ministry had led them thus far.

The urgent necessity of anti-trafficking initiatives was underlined by the growth in human trafficking year on year. As many as 26 million people are trafficked globally and that trafficking cuts across regional, national and international jurisdictions, benefitting organised crime.

“We know for instance that Albanian girls are the highest number of victims [of trafficking] being rescued in the UK. Three years ago, that wasn’t the case, but it is now according to government statistics,” Sr Imelda told the Catholic Times.

As the UNHCR has highlighted, more trafficked women come from Albania than any other country in southeastern Europe. Of those trafficked, almost 60% were tricked into prostitution, and 35% were abducted. But it is not only women, children and men are trafficked too.

In 2005, Sr Imelda along with another Loreto Sister began working with Caritas in Tirana, finding their feet culturally and socially and networking with NGOs to see how they could contribute to efforts to stem trafficking. Today that commitment has spawned ten projects focused on prevention, awareness-raising, rehabilitation and advocacy for women, men and children.

The major issue for the president of Renate is the demand for trafficked women, children and even men for the sex trade.

“We have to address the problem of demand and the problem of irregular laws on prostitution. 50% of trafficked victims are in sex tourism or the sex labour industry. 80-90% of prostitutes are not there by choice, they are there because of poverty or need and the trafficked victims are there by force. There needs to be an outcry from the Church and every single government in the world. There should be much more law on the side of the victims and there should be no criminalisation of victims. That is very key.”

The Mary Ward Loreto women’s project operates six centres across Albania and much of the focus of the work is gender equality because the culture of patriarchy means good laws are routinely ignored.

The women’s project works with up to 1,000 women and has established seven small businesses aimed at economic empowerment and helping participants become “economically viable and strong”. The projects also offer care and support in healthcare, conflict resolution and tackling domestic violence.

Sr Imelda Poole was the tenth of twelve children, six boys and six girls. It was a Catholic upbringing. Her mother had converted to Catholicism when she was a teenager while her father’s family was from Oxfordshire and had been Catholic for generations.

Studying for her A levels, she began to discover God personally through a book ‘The Love of God – Meditations on the Love of God’. Fr Adrian Charterton, a priest in the cathedral parish where she lived, became her spiritual adviser.

As she finished school she decided to test her vocation. “The priest thought I should wait but my parents were open. I remember my father taking me to a pub in Nottingham for three hours to quiz me about my vocation and at the end of it he said, ‘well if this is God’s will – you go for it’. And that was it.”

Prior to this mission Imelda began ministry as a teacher in secondary education followed by a ministry in formation, spiritual direction, counselling and before moving to Albania, she worked for 16 years in grass roots ministry on a council estate in the North East of England.

The aim of the NGO, Mary Ward Loreto (MWL) Foundation, is to focus on the work being developed against trafficking within the philosophy and charism of Venerable Mary Ward. The main values are Freedom, Justice and Sincerity.