Home > Featured > Put finance back in the service of the economy: IMF chief

Put finance back in the service of the economy: IMF chief 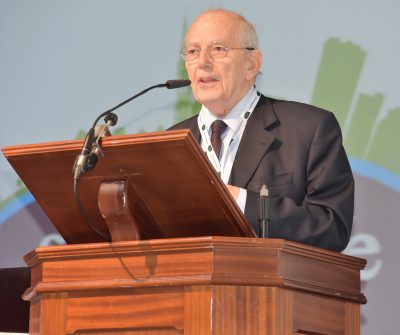 The former Governor of Banque de France and managing director of the International Monetary Fund (IMF) has called for finance to be put back in the service of the economy.

In his keynote address to this year’s Faith and Life Convention in Belfast, Dr Michel Camdessus said that in recent decades, “private finance has become more important than public finance, but frequently it has also become more predatory”.

Dr Camdessus outlined to 500 people who attended the convention, which is hosted by the Diocese of Down and Connor, some of the trends which a team of 25 high-level researchers from a variety of fields have predicted will shape the world by 2050.

He spoke on the topic “Faith in a Better World: Embracing the Mission to Shape the World of Tomorrow” and detailed eleven megatrends that have been detected.

The global factors influencing the future shape of the world include changing population demographics, global finances, increased consumerism without cognisance of the world’s finite resources, urbanisation, climate change and new forms of violence experienced across the globe.

Dr Camdessus encouraged the convention’s participants from 87 parishes across the Diocese of Down and Connor to realise that each person is invited by Christ to read the “signs of the time”.

He suggested five paths of humanity that could contribute towards a universal common good:

He said these paths of humanity are part of the Christian mission. “These five paths suggest nothing less than a renewal of a civilisation which is threatened everywhere.”

A committed Catholic, Dr Camdessus was appointed by Pope John Paul II to serve as a lay member of the Pontifical Council for Justice and Peace. He has been an advisor to the Vatican on Catholic Social Teaching and he played a major role in the Vatican’s campaign for a reduction of the Third World’s debt burden.

He is also committed to the local Church in France and has played a central role in the ongoing development of Semiane Sociales de France, which he presided over for many years. It is an annual forum for people to gather and reflect on the Gospel and the challenges facing society.

In his Belfast address, Dr Camdessus challenged those at the convention to consider their own mission in the world, reflecting on the recent message of Pope Francis for the October Month of Mission.

Speaking to the younger generation, Dr Camdessus said, “The fascinating thing is that history, even if evolving within that framework, is not yet written. Your generation (I can no longer speak about mine) embracing the mission to shape the world of tomorrow is far from powerless. Your generation is still in a position to work towards reducing the risks arising from these megatrends and to take advantage of the opportunities they offer for the common good.”

On the issue of the global demographic he highlighted how Africa, “the continent of youth”, will see its population double in 35 years to reach 2.5 billion by 2050. It will quadruple by 2100, reaching 4.4 billion, while Europe will have seen, in the meantime, its population decline to 650 million inhabitants. Elsewhere, the population will stagnate and regress almost everywhere. 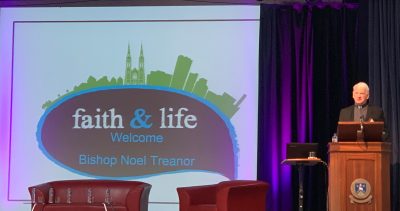 “The heart of the problems of tomorrow is this: will we have a rancorous and at times, violent confrontation? Or a mutually enriching relationship between Africa and Europe, just 16 miles from its shores? This is possibly the most critical issue facing Europe.”

He also suggested that there will be a tectonic shift in economic power from the west to the east, due to a major breakthrough of the emerging economies.

“We are witnessing an extraordinary reversal of world power relations. The G7 no longer has the legitimacy to claim to lead the world. It will represent, in 2050, only 20 per cent of world GDP as against 52 per cent in the 1980s. This shift particularly affects Europe. Europe risks being dislodged from the world’s governance structures unless its countries really unite. Europe, if united, would still have a major role to play in a fragmented world; Europe will have to choose between the union and the prospect of insignificance or being a vassal.”

Another challenge will be finite natural resources such as water, energy, minerals and arable land, which are today being exhausted.

“This inescapable fact calls for a radical change,” he stressed, referring to the predicted expansion of the middle class globally by 4 billion people. He questioned what the impact would be if those 4 billion adopt Western lifestyles.

A technological breakthrough, be it digital, interconnectivity and access to information for all, robotics, artificial intelligence, advances in medicine, he warned, presented several challenges including “a massive obligation of continuous ongoing training and formation”.

“This retraining will be required several times in the course of life in order to address, for example, such risks as the dangers of military uses of technological breakthrough and the delusions of ‘transhumanism’.”

The next three decades would see a greater obligation on the world to substitute a model based on “more frugality” for the model of over-consumption, which he warned was “leading us to the abyss”.

There would also be a need for the world’s major religions to develop interreligious dialogue and the promises of fraternity seen in the Joint Declaration of Imam Al-Tayyib of Al Azhar and Pope Francis during their meeting in Abu Dhabi on 4 February 2019.

In an effort to eradicate extreme poverty and reverse the rise of inequality, Europeans must renew its partnership with African countries, and agree to invest in all key areas of their development, from education to rural jobs and large urban infrastructures.

“The need for a new attitude towards migration obeys the same logic. The challenge is difficult and politically heavily loaded politically, but let us remember that nobody migrates cheerfully and that the real long-term solution is to mobilise all the necessary resources to offer training and jobs, at home, to young Africans who are the future of the continent,” Dr Camdessus said.

Building on the keynote address, delegates at the Belfast convention had an opportunity to take part in a panel discussion and workshops. Among the speakers were Professor Thomas Bremer and Professor Nadieszda Kiezenko, reflecting on the sacramental and pastoral practice of the Orthodox Church; Maria Garvey examining the life of the late Jean Vanier; and Fr Martin Magill and Dr Nicola Brady who looked at the Church’s role in promoting a voice for peace.

The annual Faith and Life Convention, organised by Bishop Noel Treanor and the Living Church Office, is a dynamic and creative event which provides a much needed space for meaningful dialogue about the life and mission of the Church in Ireland today.