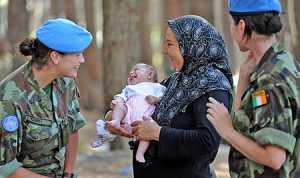 Irish troops on UNIFIL duty in the Lebanon (Pic Military.ie)

Six decades of peacekeeping by members of the Irish Defence Forces and An Garda Síochána were commemorated and celebrated at a ceremony in Dublin Castle today (Sunday).

“For 60 years, not a day has passed when an Irish soldier was not on peacekeeping duty somewhere in the world,” said Uachtarán na hÉireann, Michael D Higgins. “As peacekeepers, our Irish troops were not at war on behalf of Ireland but were operating in places where war was relentlessly occurring.

“Since June 1958, members of the Defence Forces have manned observation posts, stood guard or patrolled a zone of separation, somewhere within the world’s most volatile places. This is a unique record and one of which the Defence Forces and the Irish people can be justifiably very proud.”

Serving in Europe, Africa, the Middle East, Asia and South America, Irish Defence Forces (IDF) personnel have completed more than 66,700 tours of duty with UN, or UN-mandated, peacekeeping missions. Ireland’s involvement began only three years after Ireland joined the United Nations Organisation, with the deployment of 50 Irish officers to the United Nations Observer Group in Lebanon (UNOGIL) to prevent the illegal infiltration of personnel or arms supplies from Syria to Lebanon.

Today, there are 637 IDF men and women serving on nine different overseas missions in different parts of the world. “For these Irish men and women, service with the United Nations is rightly regarded as noble and important,” said the President. “The effectiveness of the United Nations depends on its reputation as a force, for peace, for good, in the world. Ireland’s participation in UN and UN-mandated missions illustrate the very positive and practical difference that small countries, like Ireland, can make in the world’s conflict zones.

“As President of Ireland, I very much welcome this opportunity to acknowledge the professionalism, the bravery, and the commitment to peace and humanitarianism that lie at the core of the Defence Forces’ engagement as peacekeepers.

“On behalf of the Irish people, I wish to thank each and every one of those men and women for the part they have played, through their service all over the world, in continuing the proud tradition of Irish peacekeeping. 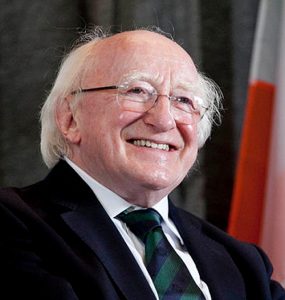 “This tradition is an essential component of Ireland’s foreign policy, driven as it is by the very values and principles that have guided the actions of our state on the international stage ever since independence – a commitment to multilateralism and to the values of peace, international security, and global justice,” President Higgins said.

The 60th anniversary was used to remember and honour those Irish Defence Forces personnel who made the ultimate sacrifice in the line of duty. In total, 86 members of the Defence Forces and one member of An Garda Síochána have lost their lives on UN peacekeeping duty overseas. “Behind that stark figure lies, of course, so much lost potential and so many families ruptured and bereaved,” said President Higgins. “Our thoughts and prayers are also with those peacekeepers and their families today.

“The decision by any Government to send its troops overseas on UN peace support operations is never taken lightly. The safety of our service men and women who undertake this important task must be our primary concern. We salute all of the brave women and men who serve, and have served, in peacekeeping operations around the world, and pay tribute to those who have made the ultimate sacrifice in the pursuit of peace.”