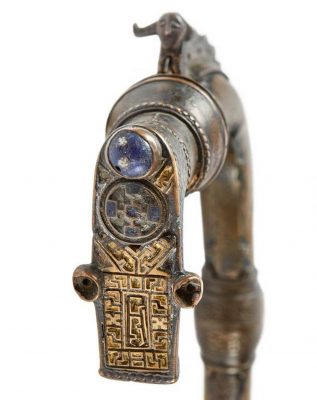 One of the oldest croziers in Europe has been handed over by the Jesuits to the National Museum and from Wednesday went on public display for the first time since 1932.

The ‘Prosperous Crozier’ was discovered in a bog near Prosperous in Kildare in 1839, and had remained in the care of the Jesuit Community in Ireland at Clongowes Wood College.

The crozier is believed to date back to between the 9th and 11th centuries AD. It has never been on public display, except briefly during the Eucharistic Congress in 1932, and briefly at the Ulster Museum during the 1980s following its restoration.

“We hope that this treasure will be enjoyed and appreciated by all who come to see it. It is a reminder of our rich Christian heritage, providing a wonderful link to life in the Irish Church over a millennium ago,” said Fr Michael Sheil SJ, Rector at Clongowes Wood.

“We are very fortunate in Clongowes to have had the Prosperous Crozier in our possession,” he said, adding that he was grateful to the National Museum “for enabling us now to share it with the people of Ireland, for years to come”.

The artifact belonged in the public domain, he told the Irish Independent, and after years of deliberation the community and trustees of Clongowes Wood College said it was time to put it on public display.

“Once we realised the value of it – not the monetary value but the significance of it – and the more we became aware of its significance, we said ‘this is not something we should keep to ourselves’,” he said.

Croziers take the form of a shepherd’s crook, symbolising the pastoral role of the Church in looking after its ‘flock’. They were recognised as potent symbols of power when in use.

The ‘Prosperous Crozier’ is considered to be one of the the oldest, securely-dated, complete croziers from Ireland and Britain, and one of the oldest in Europe. Measuring 1.34m in height, the crozier is the tallest of the surviving early medieval Irish croziers. An inscription on the crozier suggests that it was associated with St Mary’s Abbey in Dublin.

Maeve Sikora, Keeper of Irish Antiquities with the National Museum, said the crozier was a “unique and highly significant artifact that was made around 1000 years ago.

We are fortunate to have been in a position to research this beautiful crozier before placing it on display. The Jesuits at Clongowes cared for this crozier for many years, and through its study, their students undoubtedly gained a deep appreciation of this nation’s wonderful heritage. We are proud to continue this dual tradition of caring for and learning about this object for the years ahead.”

In 2016 the Jesuits donated rare manuscripts and several books printed before 1500 (known as incunabula) to the National Library on indefinite loan. They also donated the famed Caravaggio painting entitled ‘The Taking of Christ’ to the Irish State on ‘indefinite loan’ in 1993. The painting went on public display in the National Gallery of Ireland in 1993.