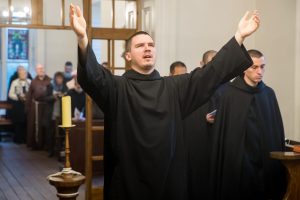 A 28 year old Australian has exchanged the surf and sunny beach life of his native Sydney, for Ireland where he has  become a monk at Silverstream Priory in Meath. Last Saturday (13 January) Brother Cassian Maria Aylward, made his first vows as a Benedictine monk at the Priory in Stamullen.

In his homily for the occasion, Dom Mark Kirby, O.S.B., Conventual Prior, said, “Why did you leave the sunshine and sparkling waves of the beaches of Sydney for this darkling east coast of Ireland? Why did you forsake the opportunities offered you by the world to travel the globe to this place, coming to this day, and to this hour? You did it because, like John the Baptist in today’s Gospel, you saw Jesus coming towards you. “John saw Jesus coming towards him” (John 1:29).

Brother Aylward, made his profession on the feast of the Baptism of the Lord. During Mass in the Oratory of the Priory, Dom Mark Kirby received Brother Cassian’s vows of stability, conversion of manners, and obedience, for a period of three years, as set forth in the Rule of Saint Benedict.

“To those who ask you, “But why a monk?” you can answer only this: “I saw Jesus coming towards me”,” said Dom Mark Kirby. “And should anyone, be intrigued, or bewildered, or fascinated by the choice you have made, ask you why you became a monk, give them the only answer possible, the one answer intelligible, even to the littlest souls: “I saw Jesus coming towards me”.

Brother Cassian, is the son of Diane and Paul Aylward, and his brothers are Matthew and Luke Aylward. He is the great–grandson of the noted Australian classicist, Catholic apologist, poet, and Papal Knight, Dr Frank J. H. Letters.

He is a 2007 graduate of St Paul’s Catholic College, Manly, and holds a degree in education from Notre Dame University, Sydney.  Before entering into the monastic life in 2016, Brother Cassian was active in body–boarding in the Australian surf, and taught at a primary school in Sydney.  Brother Cassian is currently the monastery’s guestmaster. 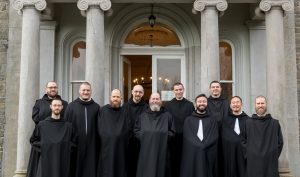 The Benedictines at Silverstream Priory

Silverstream Priory was founded in 2012 at the invitation of the Most Reverend Michael Smith, Bishop of Meath, and canonically erected as an autonomous monastery of diocesan right on 25 February 2017.

From the early 15th century the property belonged to the Preston family, premier Viscounts of Ireland and Lords of Gormanston. In 1843 Thomas Preston (1817-1903), son of Jenico Preston, the 12th Viscount (1775-1860), built what is now Silverstream Priory. From 1955 it was occupied by the Visitation Sisters and they had departed before the monks arrived.

The community of Silverstream Priory use Latin and Gregorian Chant, celebrate the Divine Office in its traditional Benedictine form, and Holy Mass in the “Usus Antiquior” of the Roman Rite. Praying and working in the enclosure of the monastery, the monks of Silverstream keep at heart the sanctification of priests. They do works suited to their monastic vocation, including developing the land and gardens, hospitality to the clergy in need of a spiritual respite, scholarly work, and publishing.