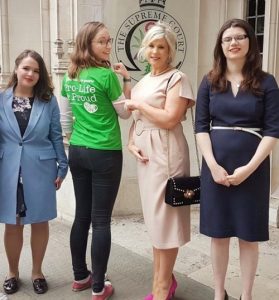 Members of Precious Life stand outside the Supreme Court, 7 June 2018

Unlike other parts of the UK, the 1967 Abortion Act does not extend to Northern Ireland, where abortion is only permissible where a woman’s life is at risk, or there is a risk of permanent and serious damage to her mental or physical health. In all other cases, abortion is a crime.

The NIHRC challenged the law on the basis that it was incompatible with article 3 (the prohibition of torture and of inhuman or degrading treatment), article 8 (the right of everyone to respect for their private and family life) and article 14 (the prohibition of discrimination) of the European Charter of Human Rights.

The Supreme Court found that the Commission did  not have legal standing to bring the proceedings because they were not instituted by identifying any unlawful act or any potential victim of it, although three justices dissented from that conclusion.

Precious Life said the Supreme Court ruling “reaffirms that abortion is an issue for the Northern Ireland Assembly and not the courts”. The Supreme Court, “or any court, does not have the power to overturn our life-saving, pro-life laws that protect unborn babies and their mothers,” said Director of Precious Life, Bernadette Smyth.

In the judgments, a majority of the judges agreed that the law existing in Northern Ireland was incompatible with human rights law in cases of fatal foetal abnormality and sexual crime. Commenting on this, Ms Smyth said the judges may have “their individual personal opinions”, but “they are not legally binding on our laws, on devolution, or on the democratic process in Northern Ireland”.

Our laws do not breach international human rights because there is no ‘right to abortion’ under any international legal instrument including the European Convention on Human Rights, the Universal Declaration of Human Rights and the International Covenant of Civil and Political Rights, she continued. “In fact, the ‘UN Convention on the Rights of the Child’ – to which the UK has signed up  – states ‘the child … needs special safeguards and care, including appropriate legal protection, before as well as after birth’.”

She criticised the Northern Ireland Human Rights Commission for wasting taxpayers’ money – “money that should have been used instead to help support women in crisis or unexpected pregnancies, with life-affirming healthcare and holistic support that protect both mother and baby,” she said. “Women deserve better than abortion. Northern Ireland’s two-patient care model in pregnancy has led us to have one of the lowest maternal mortality rates in the world.”

On Monday, meanwhile, the President of the High Court, Mr Justice Peter Kelly, will begin considering three separate applications to the High Court challenging the result of the referendum to repeal the Eighth Amendment.

The petition, brought by Dublin woman Joanna Jordan, claims that a large number of No voters were deregistered and there was an unexplained “swing” towards the Yes side.

The second petition, brought by Charles Byrne from Drogheda, concerns the Referendum Commission’s information campaign and booklet, saying they failed to convey the nature, breadth and legal effect of the proposal being voted upon. He also claims “misstatements” were publicly made by the Taoiseach and Minister for Health during the referendum campaign.

The third petition is brought by a Mr Tracey, challenging the Referendum Commission’s information campaign and booklet, which included a “serious” omission in not referring to a decision of the European Court of Human Rights in the case of D v Ireland concerning the circumstances surrounding abortion in Ireland for fatal foetal abnormalities.