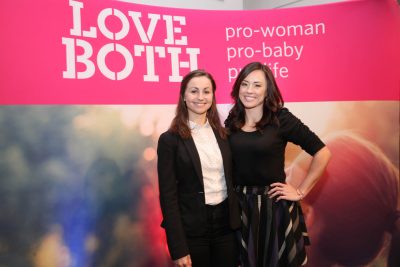 The film Unplanned – which tells the story of Abby Johnson’s journey from Planned Parenthood abortion clinic director to one of America’s most prominent pro-life voices – reached No. 4 in box-office sales across the US in 2019. It also proved a hit with audiences in Ireland following its later release in cinemas nationwide.

Later this evening, Friday 17 April, will see the first ever online screening of Unplanned. Click here to reserve a spot in the 2,500-person virtual theatre. There will be free access from 10 p.m. (GMT) on 17 April until 6 a.m. (GMT) on 18 April.

Abby’s story has changed the minds of thousands about the reality of abortion and has helped inspire hundreds of abortion facility employees to quit their jobs and dedicate their careers to defending life. If you haven’t seen it, watch the trailer here.

Staff at Students for Life of America have also created a free Unplanned discussion guide to start a conversation with family and friends afterwards.

In an exclusive interview with CatholicIreland.net last year, lead actress of Unplanned Ashley Bratcher shared her own personal story. She described the conversation in which she told her post-abortive mother about her landing the job to play Abby Johnson: “When I talked to my mom … I hesitated because she had had an abortion when she was 16. I knew that. And as I told her Abby’s story she got emotional; I could hardly understand her, and she said, ‘Ashley, I need to tell you something. What you don’t know is that when I was 19 I was in the abortion clinic for the second time. I was called back to be examined. I was on the table when I got up and I decided I couldn’t do it and walked out and I decided to have you.’

“Hearing that story, it put things in perspective for me. And when I got asked how that felt, the only way I can explain it is like having a near-death experience. You think back on all the things that you’ve done in your life, and the relationships you have, and to have a moment when you realise that could have never happened – it just blows my mind … It was another thing that just empowered me in the moment and made me want to fight harder so that people understand the value of human life.”

Ashley encouraged everyone in Ireland to watch and promote the film Unplanned and to share it with at least one friend who disagrees with them on the issue of abortion.