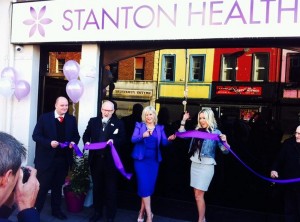 This is Stanton’s first clinic outside the US which it hopes will in time replace Marie Stopes.

“Stanton will do everything that is needed for a woman and her child, not just for the first nine months of pregnancy but for as long as they need us. Our long term vision is to replace the Marie Stopes centre in Belfast with a life affirming centre that offers real choices and real alternatives,” she said.

Brandi Swindell, the founder and CEO of Stanton Healthcare in the United States travelled from Boise in Idaho for the opening.

“Stanton will provide the best care and practical support for mums to help overcome obstacles in choosing life for her baby. We will offer a much needed alternative at no cost because we believe that women and their unborn children deserve better than abortion,” she said at the opening.

US congressman Chris Smith visited Belfast to support the opening of the clinic.

Mr Smith is co-chairman of the Congressional Bipartisan Pro-Life Caucus and together with Bernadette Smyth, met a number of SDLP and DUP politicians at Stormont.

He stressed that women using the Stanton clinic would be “cared for no matter what their circumstances”.

Mr Smith described the Stanton clinic as a refuge where women “can find tangible help and very loving individuals to help with their difficulty. Women who have been helped, they come back, they volunteer, they radiate love and that is an enormous game changer.”

According to its website, the mission of Stanton Healthcare Services is to prevent teen pregnancy and the spread of sexually transmitted diseases and to provide women facing an unplanned pregnancy with “life-affirming options in an environment that promotes physical, emotional, and mental well-being”.

They believe that all life is created with an intrinsic value. “We are motivated to uphold the dignity of women and the lives of their children.”

The Stanton Healthcare clinic is on Great Victoria Street in Belfast.

Separately, on Thursday, the Pro Life Campaign criticised pro-choice campaigners who say they plan, in conjunction with the Women on Web group to drive a bus around Ireland this week offering abortion pills to women with unplanned pregnancies.

Ruth Coppinger TD has indicated that she will support the abortion pill bus while the PLC accused those behind the stunt of being “irresponsible”.

Commenting on the story, Dr Ruth Cullen of the Pro Life Campaign said, “This is just the latest publicity stunt from Deputy Coppinger. But it is an incredibly dangerous and irresponsible one that puts the lives of women at serious risk.”

She said those lending their support to the abortion pill bus have no credibility talking about women’s health in the context of the abortion debate going forward.

“It is one thing to constantly misrepresent the 8th Amendment as Deputy Coppinger does. It’s quite another thing to use an abortion pill bus as a means of attracting publicity.”

Dr Cullen said the thinking behind the bus campaign appears to be the more outrageous the stunt the better, as long as it helps dismantle the 8th Amendment.

The stories of those who regret their abortions are being drowned out of the debate as well as the rights of the unborn child, she warned.

“If there was any seriousness at all in public discussion of the issue, Deputy Coppinger would be roundly condemned in the media and politics for this latest appalling stunt,” Dr Cullen said.