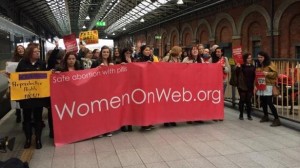 The Pro Life Campaign has criticised pro-choice activists who took the ‘abortion pill train’ to Belfast on Tuesday to collect and bring back abortion pills which are illegal south of the border.

In a statement, Caroline Simons of the Pro Life Campaign said, “This appears to be an initiative more concerned with garnering publicity for the pro-choice cause rather than a genuine regard for women’s health and well-being.”

She said the groups involved had “no regard for the humanity of the unborn child and no interest in drawing attention to the fact that abortion has significant negative mental health consequences for many women.”

Ms Simons also recalled that coincided with the second anniversary of the revelation that the state-funded Irish Family Planning Association was coaching women how to import illegal abortion pills to self-administer without any medical supervision.

“Additionally, they were giving women life-endangering advice including telling them to falsify their own medical records,” she claimed.

Ms Simons said it was therefore “outrageous” that the IFPA had weighed in on the debate on the abortion pill train journey.

She added that it was “astonishing” that harder questions weren’t being asked of those who are campaigning for abortion. “Women deserve better,” she said.

According to the Irish Independent, up to 30 women and pro-choice TDs travelled on the ‘abortion pill train’ on Tuesday and took their tablets to a rally in Dublin on their return.

Socialist Party TD Ruth Coppinger was among those who took one of the pills, claiming it was safer than driving or taking Viagra.

Organisers said the trip was held to mark the second anniversary of the death of Savita Halappanavar.