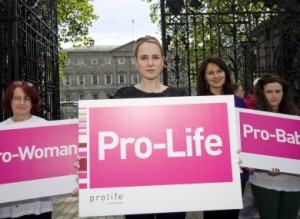 Confirmation that more than 9300 calls were made to the HSE’s My Options helpline in the first 8 months of this year has been described as alarming and tragic by the Pro Life Campaign.

According to The Irish Examiner, the HSE set up the support service My Options when abortion services became legal on 1 January.

While these resources should be expected to be neutral, 9 of the 23 unplanned pregnancy counselling agencies listed on the website, which the HSE funds, are those of the Irish Family Planning Association (IFPA). The IFPA, according to its website, “is a pro-choice organisation and our counsellors will support a woman’s own decision in all cases.” Further still, IFPA launched an extensive campaign to introduce abortion to Ireland as early as 2005, with Ivana Bacik, Labour Party politician and long-standing pro-abortion campaigner, as its main spokesperson.

Two-hundred-and-forty-four of the calls made to the HSE’s My Options in the first 8 months of this year were from women who had passed the 12-week limit for a medical abortion. Spokesperson for the Pro Life Campaign, Eilís Mulroy, said it was clear that virtually nothing is being done in terms of actively promoting life-affirming alternatives or meaningful supports for women in crisis:

‘These numbers bear out the assessment provided by the Pro Life Campaign prior to the referendum, particularly with respect to the absurd claim that abortion once introduced would be “safe, legal and rare”.

‘Even if we allow for the fact that at least some of the recorded calls may have been repeat or follow-up calls, the numbers remain profoundly shocking.

‘If 6000 of the 9300 callers went on to have an abortion, this would equate to, on average, about 25 abortions every day of the 8-month period that we have information on.

‘This would be a horrific outcome by any measure in terms of the loss of unborn human life and the damage being done to vulnerable women.’

Ms Mulroy voiced the urgency to ensure that these latest numbers from the HSE freeline are not used as grounds to call for either expansion of access or the normalisation of abortion.

‘Instead,’ she concluded, ‘They should be used to highlight the absolute failure to promote and provide realistic alternatives to abortion.’