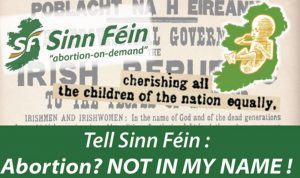 A leading Northern Ireland pro-life agency has called on the public to contact their Sinn Féin representatives on the issue of the party’s policy on abortion. At its recent Ard Fheis, Sinn Féin members voted in favour of extending abortion access in Ireland on the grounds, not just of fatal foetal abnormality, rape, or sexual abuse, (its previous policy) but also ‘where a woman’s life, health, or mental health is at serious risk, or in grave danger’.

“This is in effect, abortion on demand, and in practice, would be the same as the Abortion Act 1967 in Britain in all but name,” commented Alban Maginness, writing in the Belfast Telegraph.

Speaking to The Irish News, Sinn Féin MP for Mid-Ulster Francie Molloy, warned that the conference vote was out of step with ordinary constituents. “It’s important to keep in touch with the grassroots and realise these decisions can be taken in isolation. It’s very easy to pass a motion in the heat of an ard fheis – it’s different when you are on doorsteps and people don’t see the logic for it,” he said.  The vote did not “reflect the view of the people on the ground” he said.

“I would know from previous elections people would feel strongly about it, people felt very strongly about our position – at that time I thought it was a reasonable, good position and compromise,” he said. The new position would be “a hard sell”.

At the Ard Fheis a motion was put calling for members to be allowed a ‘conscience vote’ on abortion. Meath West TD Peadar Tóibín referred to the 1916 Proclamation. “The right to life is the primary human right. You cannot cherish all the children equally if you do not give the right to life to all the children,” he said, appealing for a free vote on the issue.  The motion was rejected.

Members of Sinn Féin are now obliged to follow its explicitly pro-abortion stance without exclusion, rather than being permitted to adopt their own conscientious stance on abortion, commented Bernadette Smyth of Precious Life.

The agency has now called on members of the public to contact their Sinn Féin representatives (MLAs and MPs) to express their opposition to the party’s abortion policy and to say that they want “ALL the children of the nation cherished equally” – as stated in the 1916 Easter Proclamation.

In addition Ms Smyth said, members of the public should tell Sinn Féin to stop deceiving their constituents by claiming the Party “isn’t in favour of abortion”. Ms Smyth was referring to comments made by the Northern Ireland leader of Sinn Féin, Michelle O’Neill last week in an interview with the Irish News who said the party “isn’t in favour of abortion” and insisted that when their members explained the new policy on the doorsteps, constituents would understand.

Meanwhile on Sunday 26th November, Feast of Christ the King, at 2:30pm, it is hoped that thousands of Irish faithful will flock to over 150 Coastal Locations to pray the Rosary together for the protection of life and the preservation and restoration of faith in Ireland.  The aim of Rosary on the Coast is to encircle Ireland with a Human Rosary by having at least 53 locations around the coast – one for each ‘Hail Mary’ in a Rosary.